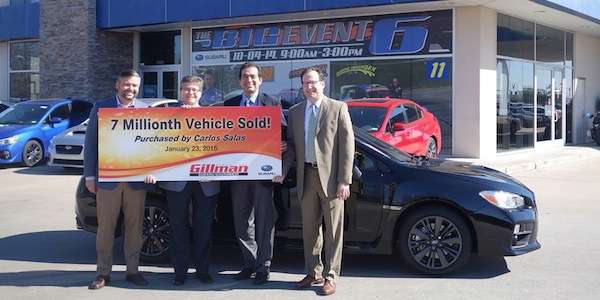 A Galaxy Blue Pearl 2015 Subaru WRX set a huge milestone for Subaru of America (SOA) in Houston Texas. Subaru sold its seventh millionth vehicle in the U.S. and the 2015 WRX was sold to Carlos Salas from Gillman Subaru of Houston South.

Subaru just finished another record year in the U.S. and exceeded 500,000 annual sales for the first time. SOA reported 40,812 vehicle sales for January 2015, a 24 percent increase over January 2014. It was fueled by strong sales in the entire lineup, and the 2015 WRX/STI line also saw the best January ever for the brand.

It’s interesting that the seventh millionth vehicle sold in the U.S. was not sold in one of Subaru’s top sales regions like the Northeast, Rocky Mountain or Pacific Northwest regions, but it was from Houston Texas where the Subaru brand is gaining traction. Although, Gillman Subaru of Houston South is one of the regions top Subaru dealers and has been “Serving Texans for 75 years.”

Eliel Ramirez said, “Congratulations to Mr. Carlos Salas for purchasing our 7 millionth new Subaru from Gillman Subaru of Houston South. We are very happy about this milestone and even more excited to welcome Mr. Salas and all of our new owners into the growing Subaru family!”

It’s fitting that the 7 millionth new Subaru was a 2015 WRX as it’s been an iconic performance vehicle for the brand since it was first introduced into the U.S. market as a 2002 model. WRX was redesigned for 2015 and continues to be a popular sports car in the Subaru lineup.

Tesla Contemplates A New Strategy for China Retail even As Sales Boom
Jay Leno on Elon Musk & EVs: “I Think He Should Get ... Credit"
END_OF_DOCUMENT_TOKEN_TO_BE_REPLACED