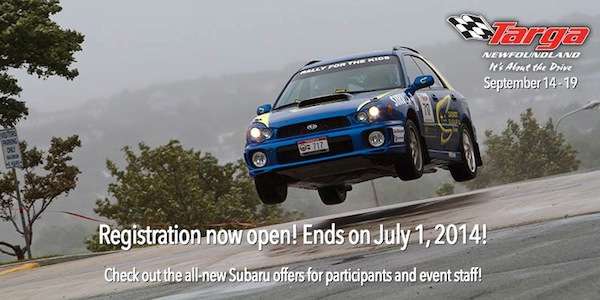 Want to drive your Subaru WRX / STI the way it was bred to be driven?

Subaru WRX / STI owners are getting ready for Targa Newfoundland 2014 as registration is now open.
Advertisement

Subaru WRX / STI owners will have a chance to drive their rally-bred cars like they were meant to be driven. We recently reported that Subaru is encouraging WRX / STI owners to get involved in motorsports. They are calling all motorsport enthusiasts to get involved in the Targa Newfoundland 2014 that is coming in September. Registration is now open and ends on July 1, 2014. What is Targa Newfoundland 2014?

It’s an international rally race covering more than 2,000 kilometers of challenging, twisty roads on the eastern portion of Newfoundland, including up to 500 kilometers of closed-road, flat-out Targa stages. Subaru Canada has supported the Targa Newfoundland international rally since its inception in 2002. It’s a great way for Subaru WRX / STI owners to get a taste of Rally racing.

Targa Newfoundland 2014 road rally that is held over a seven day period in September. The event is designed to allow owners of historic, classic and modern Subaru and other sporting motor vehicles to drive them the way they were meant to be driven in a rally competition. Each vehicle competes against itself on a handicap basis as well as against other vehicles.

Would you like to drive your Subaru WRX / STI the way it was bred to be driven? Subaru Canada has several great offers available to Subaru owner-participants. Subaru will offer a $750 rebate on the purchase or lease of a new Subaru for eligible participants, immediate family members or Targa Newfoundland event staff. They will also be giving a $500 Entrant award for participants using any model of Subaru and competing in any of the four categories (Open, Modern, Classic, Grand Touring).

In addition, Subaru Canada will offer a $2,000 cash performance award for Subaru entrants placing first in any of the four categories, a $1,500 award for second place and a $1,000 award for placing third. Subaru Canada has initiated this incentive offer with its rebate program that also includes the competitors’ families and the event’s volunteer staff.

“We are extremely pleased that Targa Newfoundland, its competitors and volunteers have been recognized by Subaru Canada,” said organizer Robert Giannou. “We are especially appreciative of the way the new Subaru Targa support program includes our event staff as they work so hard to make the event happen each year.”

Subaru is the only automaker that we know of who actually encourages their owners to get out and race their cars. So if you own a new or classic Subaru WRX or WRX STI, here’s a great way to get involved in a rally race and drive your performance Subaru the way it was bred to be driven.