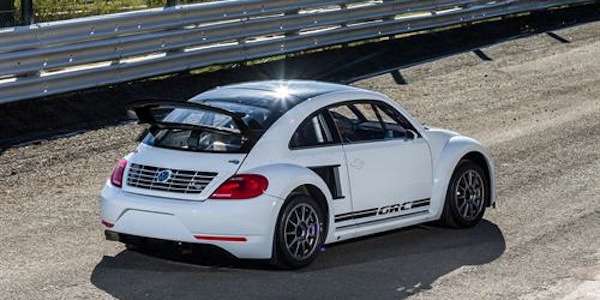 For the 2015 Global Rallycross season, Volkswagen Andretti is amping up the VW Beetle. What changes are they making that could launch them to the top?
Advertisement

The Volkswagen Andretti Rallycross team is making changes to the VW GRC Beetle that could make them an instant contender for the title this season. The team is making massive changes to the engine specs from the car that ran in selected rounds of the 2014 series. Scott Speed and Tanner Foust will be piloting the VW Beetles that will get a massive increase in power.

In place of last year’s 1.6-liter turbocharged and intercooled TSI four-cylinder powerplant, there is now a 2.0-liter TSI engine that produces 553 horsepower and 465 pound-feet of torque, compared to 544 hp and 387 lb-ft for the 2014 car. That’s a massive increase in power that will launch the Beetles off the line quickly.

Volkswagen Andretti says they believe that the extra torque of the larger engine will be important for standing start performance, which is a key element in Global Rallycross racing, as well as acceleration from slow corners. Another factor was that weight equalization for the 1.6 liter engine will be removed in the future, moving the U.S. series in line with the FIA World Rallycross series.

The 2015 GRC Beetle’s 2.0-liter turbo engine is mated to a sequential six-speed transmission, with a fixed-ratio all-wheel-drive system that features multiplate limited-slip differentials at the front and rear. The GRC Beetle uses an all-around strut-type suspension, with ZF dampers and about 9.5 inches of travel to cope with the extreme off-road portions of a Rallycross course. The car has 14.0-inch diameter front and 11.8-inch rear vented disc brakes, with four-piston aluminum calipers. The 17-inch wheels are shod with 240/640-R17 Yokohama competition tires.

Overall, the VW Beetle GRC car is 168.8 inches long and 71.7 inches wide, and weighs in at 2866 pounds. The combination of low weight, high horsepower, and all-wheel-drive, allows the Beetle GRC to sprint from 0-60 mph in around 2.0 seconds.

Because Subaru Tecnica International (STI) has “stepped up” their technical support of SRT USA, the new 2015 Subaru WRX STI dubbed the VT15x is capable of 0-60 in just two seconds...read more.

Speed and Foust will be back with VW

Scott Speed and Tanner Foust will pilot the two GRC Beetles for Volkswagen Andretti Rallycross team this season which begins May 31 in Ft. Lauderdale, Florida. “We are very much looking forward to the start of the GRC season with the Beetle,” said Jost Capito, Motorsport Director, Volkswagen. “The 2015 Beetle GRC has been further developed, based on all our experience we gained with the brand new Beetle last year. We are looking forward to a serious title challenge with Scott Speed and Tanner Foust in 2015 and we are sure that the Beetles will be real fan favorites again.”

Volkswagen Andretti Rallycross team had a strong performance in its inaugural season and is ready to challenge for this year’s driver and manufacturer titles in the Global Rallycross Championship. In 2015, the team will be on the attack with two 2015 Beetle GRC race cars with a massive power increase. They could be the team to beat. Stay tuned.