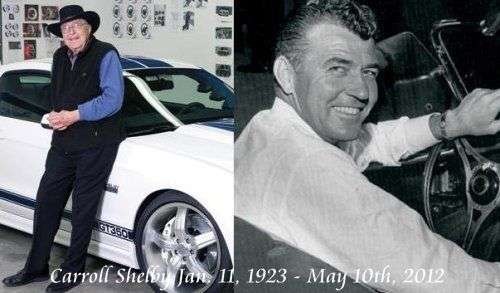 Velocity will pay tribute to Carroll Shelby with mini-series

Velocity will Pay Tribute to the Legendary Carroll Shelby in a three-part mini-series event starting Sunday May 20th.
Advertisement

When Carroll Shelby passed away on Friday, May 11th, the automotive world took a collective moment to morn his death. Even though we knew he was sick with pneumonia at Baylor Hospital in Dallas, it was still a shock and brought incredible sadness to anyone who was familiar with his legendary accomplishments. Now, Velocity will pay a much-deserved tribute to Carroll Shelby in a three-part mini-series event starting on Sunday, May 20th at 8:00 PM.

When Carroll Shelby died, Joe Conway, president of Carroll Shelby International, Inc. and board member issued this statement. “We are all deeply saddened, and feel a tremendous sense of loss for Carroll’s family, ourselves and the entire automotive industry. There has been no one like Carroll Shelby and never will be. However, we promised Carroll we would carry on, and he put the team, the products and the vision in place to do just that.”

The three-part mini-series will be called "King of the Road: Carroll Shelby” and will honor that incredible vision he brought to the automotive world. Each hour-long episode will chronicle an era in Shelby's life: his journey from a Texas farm to the top step at Le Mans where he was the first American to win the cup.

Carroll Shelby was instrumental in putting U.S. racing on the map which had long been dominated by European drivers and their cars. After leaving the racing scene, Shelby built the famous Cobra; He then began a partnership with Ford that led to building two of the most iconic American muscle cars; the Mustang GT500, and the road that car followed into the car that still bears his name, the Ford Shelby GT500.

Here is a listing of the mini-series from the recent press release.

Part I – World Premiere Sunday May 20th at 8:00 PM
The exploits of the hard charging Texas farmer turned racer are explored. From his humble early stages, Carroll Shelby takes on and conquers the world of international sports car racing at Le Mans and builds the most iconic American sports car, the Cobra.

Part II - World Premiere Sunday May 20th at 9:00 PM
Carroll Shelby teams with Ford Motor Company in 1965 and transforms the Mustang into a true race car; the GT 350. Four decades after the original GT 350, Shelby builds a new GT 350 with Ford's latest Mustang.

This could be the most watched show on Velocity ever aired. Tune in at 8 p.m. EST on Sunday for the first series on the life of Carroll Shelby.

Toyota's First EV Will Have a Name of BZ: Toyota BZ
First Videos From Inside The Boring Company's Las Vegas Loop
END_OF_DOCUMENT_TOKEN_TO_BE_REPLACED