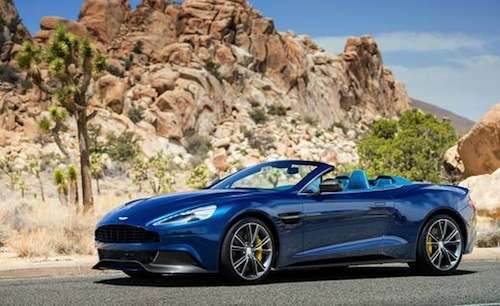 Open top motoring just got a whole lot faster and lighter with the launch of the new 2014 Aston Martin Vanquish Volante.
Advertisement

Aston Martin has just unveiled the quickest and most exciting convertible driving machine they have ever produced. As the British automaker celebrates 100 years of the brand, this is the next sports car they are rolling out to enhance the already potent lineup. The car is instantly one of the world’s most beautiful open top luxury sports cars and offers great performance, and is the first Volante to feature a full carbon fiber body.

The new 2014 Aston Martin Vanquish Volante is the first Volante to feature a fully carbon fiber-skinned body in the history of the brand. It also has the stiffest body structure yet created by the engineering team from Gaydon, Warwickshire, England. It’s 14 percent stiffer than the DBS Volante which preceded it. And like the new 2013 Ferrari 458 Spider’s hard top roof, the new convertible sports car’s triple-skin fabric roof lowers in just 14 seconds.

The most potent production convertible in Aston Martin’s lineup

The new open-top sports car features the same new AM11 6.0-liter V12 powerplant as the Vanquish coupe. And it’s just as fast too. Aston Martin says the Volante will sprint from 0-62 mph in 4.1 seconds and has a top speed of 183 mph giving the new convertible true supercar status.

The Vanquish Volante will feature the next generation VH architecture along with a much more potent 6.0-liter V12 powerplant. The significantly upgraded naturally aspirated V12 engine pumps out 565 horsepower and 457 lb ft of torque. This makes the new Volante the most potent production convertible in Aston Martin’s lineup. The V12 comes mated to a Touchtronic 2 six-speed automatic transmission and the combination helps deliver the impressive performance numbers.

The same driving dynamics as the coupe

Another first for Aston Martin is the full height windshield which means that the glass runs up to meet the fabric roof, thereby achieving a particularly clean transition. The new convertible is the ultimate Volante and features a luxurious cabin that you would expect from AM. Aston Martin Design Director Marek Reichman says, “All these elements have been pored over by the Design team, working with our Engineering colleagues, to ensure we deliver the aesthetic appeal for which Aston Martin is renowned around the world.”

The chassis has been finely tuned with new springs and damper settings and the driving dynamics are the same as the coupe that delivers the same crisp handling yet compliant ride. The Volante has a near-perfect 51:49 weight distribution that in combination with the powerful V12 and available performance six-speed gearbox unite to provide a very rewarding driving experience.

The British automaker who turned 100 this year is continuing the celebration with the beautiful new 2014 Aston Martin Vanquish Volante. Priced from $297,995 MSRP in the United States, first deliveries of the new open top sports car are expected to begin in the UK and Continental Europe late in 2013. The U.S. launch has not yet been announced. Stay tuned.