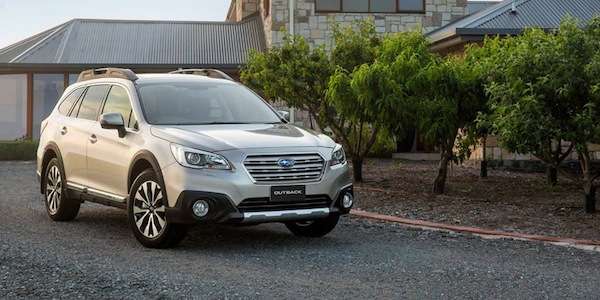 Two desirable features you won't see on the 2015 Subaru Outback

Pricing and specs for the new 2015 Subaru Outback have been announced for the UK. There’s two desirable options U.S. buyers won’t see.
Advertisement

U.S. consumers would like to have two features that show up on the new UK spec 2015 Subaru Outback. The new generation Outback pricing and specs have been announced for the UK and the crossover comes with two engine and two transmission choices. Outback in the UK will get the 6-speed manual gearbox and a 2.0-liter turbocharged diesel engine, neither of which are options in the U.S.

U.S. consumers can get the new Outback wagon with a 2.5-liter gas engine, a 3.6-liter gas powerplant and only one transmission, Subaru’s Lineartronic (CVT) automatic. Both the turbocharged diesel and 6-speed manual transmission would be an engine and transmission U.S. buyers would like to see. Subaru has never offered a diesel powerplant in the U.S., and the 6-speed gearbox was dropped last year when Subaru launched the 2015 model.

The UK Outback’s 2.0-liter turbo diesel in highly efficient and produces 150 PS (147 hp) and 350 Nm torque (258 lb ft of torque). For comparison, the U.S. spec 3.6-liter gas engine produces 256 hp and 247 lb ft of torque. The torque of the diesel combined with the turbo will deliver plenty of power and it’s highly fuel efficient. Diesel buyers can choose either a six-speed manual transmission or the CVT automatic transmission. The UK Outback’s 2.5-liter petrol engine is sold exclusively with Lineartronic.

UK consumers get a sweet deal as the new 2015 Outback 2.0 Diesel SE is priced from 27,995 Pounds (on-the-road). The all-new Outback gets similar pricing as the outgoing version despite having new exterior design, a more spacious and higher quality interior and a range of advanced safety equipment and in-car technology. This is likely due to the Pounds favorable exchange rate with the Japanese yen.

The 2015 Subaru Outback gas and diesel variants will go on sale April 1 in the UK. U.S. consumers would like these engine and transmission options, but won’t be seeing either the diesel or 6-speed manual gearbox on the new Subaru wagon. It’s not affecting Outback sales in the U.S. as the new generation wagon saw its best month ever in December. Subaru has always been a niche market automaker and they know their global markets well.