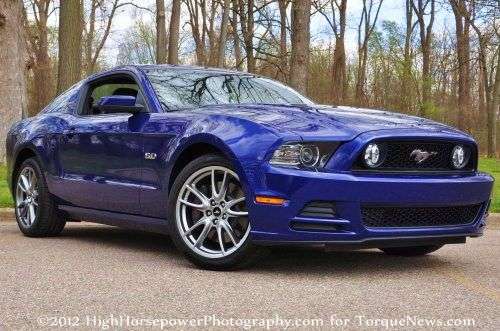 Here is the list of the top ten cars with 300 or more horsepower that are the most affordable and all are under $35,000.
Advertisement

You don’t have to spend a fortune on a car to be able to put your foot on the gas pedal and have enough horsepower to push you back in the seat. Here are ten affordable cars under $35,000 with the 2013 Ford Mustang leading the list as least expensive. They all have over 300 horsepower and give driving enthusiasts a little more fun on the commute to work. The list may surprise you and includes both coupes and sedans. There are some good deals out there for those looking for a little more horsepower under the hood.

5. Hyundai Genesis Coupe V-6: 348-hp $28,750
The 2013 Hyundai Genesis Coupe, now in its fourth year, gets a new 3.8 liter V-6 with direct-injection and pumps out 348 horsepower. The previuos generation engine produced 306 hp. The good-looking rear-wheel-drive sport coupe will go from 0-60 in 5 seconds. Hyundai is challenging the Japanese competition.

6. Dodge Charger R/T: 370-hp 29,995
The second sedan on the list is another proudly American musclecar. The Charger R/T’s HEMI V-8 puts out 370-hp, and comes with either rear-wheel or all-wheel-drive. This latest version of the American full-size sedan will compete with the best competing models the world market has to offer for under $30,000.

8. Chevrolet Camaro SS: 426-hp $32,280
The 2012 Chevrolet Camaro SS gets a LS3 V-8 engine that is used in the Corvette. The Chevy Camaro SS V-8 pumps out 426-horsepower. All that power at the rear wheels takes the car from 0-60 in 5 seconds. The Camaro SS is a true high-performance muscle car that is worth the price if your’e looking for some powerful fun.

10. Subaru WRX STI: 305-hp $34,095
The third sedan on the list is certainly no stranger to driving enthusiasts. The 2012 Subaru WRX STI gets a special 6-speed manual transmission, suspension and brakes, and a high-tech, manually adjustable all-wheel-drive system. The STI's centerpiece is a higher-tech version of the 2.5-liter four, generating 305 horsepower. Its quarter-mile acceleration times match those delivered by some muscle and exotic sports cars.

LG's New EV Battery Plant Is a Welcome News for Tesla
Tesla Giga Berlin's New Hurdle: It's Not Only the Gov't, but Now Tesla Itself
END_OF_DOCUMENT_TOKEN_TO_BE_REPLACED