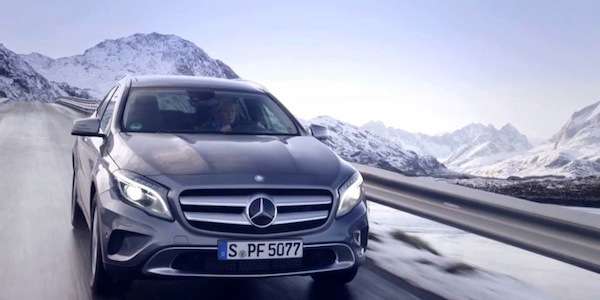 The all-new 2015 Mercedes-Benz GLA-Class continues to pile up awards around the globe. The new 2015 C-Class and A-Class also receive accolades.
Advertisement

Mercedes-Benz is piling up awards for three of their cars and the new 2015 GLA-Class is one of them for good reason. The readers of Auto Bild Allrad have given the GLA-Class, A-Class and C-Class first place votes in the reader's poll conducted by the all-wheel-drive magazine. What did the readers like about these Mercedes vehicles?

A total of 175 all-wheel-drive models were in the running for the awards in ten categories in an online poll which was held from 9 January to 7 February 2014. The awards ceremony took place on 10 April. Mercedes took home three awards and the GLA-Class has just made its dealer launch in Europe.

The GLA-Class, A-Class and C-Class models all feature the 4MATIC all-wheel-drive technology, which offers a tailor-made 4WD drive for every vehicle category. Features common to all three include excellent traction in wet and icy conditions, outstanding agility, along with optimum handling safety and energy efficiency. The sporty AMG variants use the performance-oriented AMG 4MATIC all-wheel drive, which provides for added driving dynamics.

The 2015 GLA-Classis the first Mercedes to be available with the new-generation all-wheel-drive 4MATIC with fully variable torque distribution. The new system features a power take-off to the rear axle that is integrated into the seven-speed dual clutch automatic transmission, and the rear-axle gear with integrated, electrohydraulically controlled multi-disc clutch. The new-generation 4MATIC has a lower weight and also allows fully variable distribution of the drive torque between front and rear axles.

This isn’t the first award for GLA and C-Class. Readers of the German motoring magazine "Auto Zeitung" have voted the Mercedes-Benz brand into top place three times: the 2015 Mercedes GLA won in the SUV class, while the new 2015 C-Class was victorious among the saloons as well as being voted as champion across all classes. Mercedes-Benz has created a new segment with the GLA luxury compact SUV and it’s already a success.

Why does the new 2015 GLA-Class keep piling up awards? The new luxury compact 2015 Mercedes-Benz GLA-Class gets a progressive design that will allow new Mercedes millennial buyers to use it for daily commuting during the week, and use it for recreation on the weekends. It’s small and compact enough for city commutes and robust enough with 4MATIC all-wheel-drive for off-road adventures.

Look for the all-new 2015 Mercedes-Benz GLA-Class to be a big hit with a new generation of consumers around the globe who will use the luxury compact SUV for recreation. It will arrive in U.S. showrooms fall of 2014, and available with the new-generation 4MATIC in the U.S. in early 2015. Stay tuned to Torque News for the latest 2015 GLA-Class news.