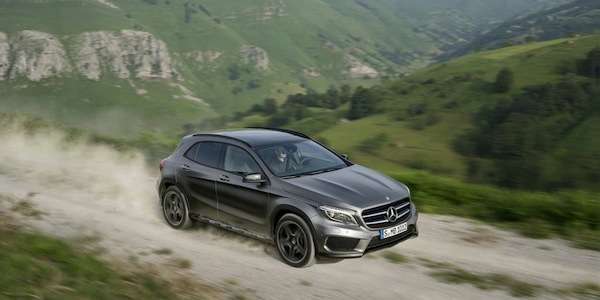 The all-new 2015 Mercedes-Benz GLA-Class is launching in Europe and is celebrating as the first models hit showrooms.
Advertisement

It was a big day in Europe yesterday as Mercedes-Benz celebrated their market launch in Germany when customers headed to the showrooms for the dealership premiere of the GLA-Class. At the same time, the 2015 Mercedes-Benz GLA 45 AMG is also celebrating its sales release. The luxury compact SUV is a new model for the German automaker and will “reinterpret” the compact SUV segment in a big way.

The new luxury compact SUV gets a progressive design that will allow new Mercedes buyers to use it for daily commuting during the week, and use it for recreation on the weekends. It’s small and compact enough for city commutes and robust enough with 4MATIC all-wheel-drive for off-road adventures. Young millennials will be drawn to the new compact SUV who lead active lifestyles.

Millennials will like the fact that GLA is fuel-efficient and just set two environmentally friendly benchmarks. GLA as has now been confirmed by the neutral inspectors from the TUV Sud technical inspection authority in Germany as an environmentally friendly vehicle. GLA has been awarded the Environmental Certificate in accordance with ISO standard TR 14062. The award is based on a comprehensive life-cycle assessment of the model series, documenting every detail of relevance for the environment.

2015 Mercedes GLA-Class sets two environmentally friendly benchmarks with its segment-leading Cd value of 0.29 and increased use of recycled and natural materials. GLA is fuel-efficient because of its excellent aerodynamics. It’s Cd value of 0.29 makes it the leading small SUV with a drag area of just 0.66 m squared.

The 2015 Mercedes-Benz GLA 45 AMG performance SUV is also celebrating its sales release. It offers performance to go along with the GLA’s utility. AMG, the performance brand of Mercedes-Benz has taken the GLA-Class and given it their special treatments. The combination of the distinctive design, exclusive appointments as well as superior engine power and driving performance is unique.

GLA 45 AMG features the most powerful series-production four-cylinder engine in the world and pumps out 265 kW (360 hp) and 450 Nm on the road. The GLA 45 AMG runs like a true performance SUV. It accelerates from zero to 100 km/h in 4.8 seconds and reaches a top speed of 250 km/h (electronically limited). And it comes standard with a performance AMG 4MATIC all-wheel drive and the AMG SPEEDSHIFT DCT 7-speed sports transmission. For those wanting the ultimate performance compact luxury SUV, this is it.