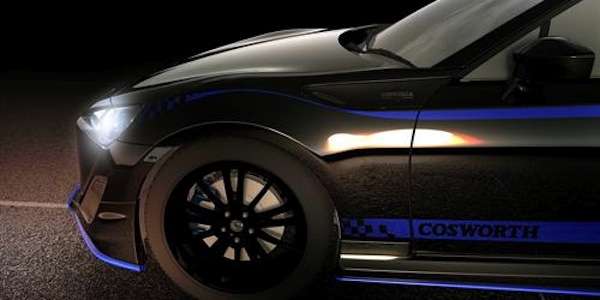 What will this mean for performance fans?

Cosworth, who is located in the UK, is a global technology business that develops performance upgrades for automotive and sport. Because of their motorsport heritage and decades of building relationships with automakers, Cosworth has positioned themselves to become an approved upgrade partner for global car manufacturers. They will be offering “fully validated” power packages and it starts with Subaru FA20 engine upgrades.

Cosworth will offer these fully guaranteed Power Package options that will take the Subaru FA20 engine’s power output from the standard 197bhp to a fully validated 325bhp and eventually on to a 380hp race track configuration. Available immediately will be the Stage 1 Power Package that Cosworth says will bump the hp in the sports cars to 230 bhp.

What will the package include?

The Stage 1 Power Package will come with four items. A Cosworth premium quality free flow sports exhaust manufactured in partnership with Nameless Performance.  A “Power by Cosworth” calibration kit and calibration file designed by Cosworth using the latest technology to maximize the peak performance of the stage components working together.

It also includes an exclusive Cosworth vehicle badge and a uniquely numbered Cosworth authentication plaque. A Cosworth performance filtration solution and low temperature thermostat will work together with the exhaust and calibration to deliver “predictable and consistent performance.”

Cosworth will also feature a “scalable system approach” that means additional power upgrades can be added easily, integrating each system with the next for even more power down the road.

Cosworth has offices all over the globe, in Chicago, UK, Europe and Japan. They will be able to offer 2015 Subaru BRZ, Scion FR-S and Toyota GT86 fans all over the globe Performance Packages that will allow performance enthusiasts to unlock more performance potential from their sports cars. Cosworth did not announce pricing, but look for these performance packages to be offered this summer. Fans can go here for more information.