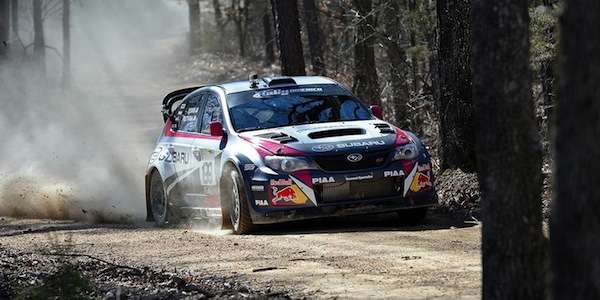 Watch Travis Pastrana and co-driver Chrissie Beavis take the 2014 Subaru WRX STI at high speeds at Missouri's 2014 Rally in the 100 Acre Wood. What's it like to ride along?
Advertisement

The Subaru WRX STI is bred for Rally racing, but taking the performance Rally car at high speeds and jumps is incredibly challenging. In the video below, we get to climb onboard the WRX STI and get a good idea of what it’s like to run full speed on Stage 13 "Camelback" at Missouri's 2014 Rally in the 100 Acre Wood.

This was Travis Pastrana’s first race since rejoining the Subaru Rally Team USA with co-driver Chrissie Beavis. Pastrana drove a new 2014 Subaru WRX STI and hung on to take second place overall behind favorite Ken Block. This was Pastrana’s first rally podium after a nearly three year absence from Rally racing with Subaru. The second place finish at Rally in the 100 Acre Wood was even more remarkable considering he withstood two intense days of rally racing with a repaired broken leg and recently dislocated ankle.

After nearly three years away from the sport, Pastrana, a former four-time Rally America Champion, began The Rally in the 100 Acre Wood with conservative goals, aiming to log miles and get back up to speed safely. In his last full season of Rally racing in 2009, he won the Rally America Championship. But things have changed since then. Pastrana needed time to “get back up to speed again.” He had both a new WRX STI and new co-driver to get accustomed to.

He also needed to acclimate to his new co-driver, veteran co-driver Chrissie Beavis, and the new 2014 Subaru STI rally car was substantially faster than the Subaru he drove for the team nearly three years ago. In addition to those challenges, his dislocated ankle and recently broken leg hobbled Pastrana throughout the weekend.

Named after the storybook home of Winnie the Pooh, The Rally in the 100 Acre Wood is set in the foothills of the Ozark Mountains of Missouri. This was round two of the eight event Rally America Championship, and features extremely high-speeds on smooth and flowing gravel roads that are a favorite of many rally drivers. The drivers are flying through the tree-lined course and going over narrow bridges while navigating their cars at high speeds.