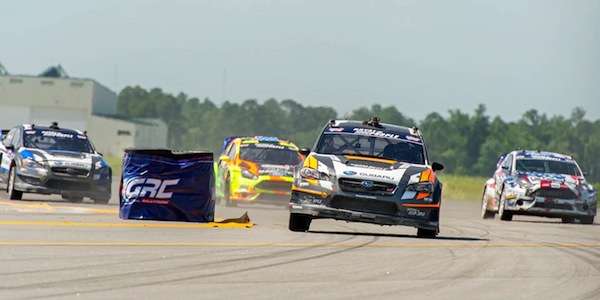 Both 2015 Subaru WRX STI GRC cars make it to the Final at GRC MCAS New River. What happened to SRT USA?
Advertisement

Subaru Rally Team USA was hopeful they would have a better showing at MCAS New River than the first three rounds. It was another disappointing Final for the #11 and #81 2015 Subaru WRX STI Global Rallycross cars.

After surviving the second Semi-final round, in which Lasek started on the second row, both Bucky Lasek and Sverre Isachsen made it to the Last Chance Qualifier (LCQ). Lasek took first place and both Subarus were able to advance to the Final where anything can happen.

In the 8 lap, 10 car Final, both drivers start near the back of the pack, Lasek on the third row and Isachsen all by himself in the fourth row. This is not an ideal place to start with so many faster cars ahead of the Subaru’s who have been slower in the first three rounds and have struggled to keep up.

Lasek got a good start and immediately moved into third place after taking the Joker on the second lap. Isachsen in last place can’t get by the faster cars after starting in the last row. Lasek’s #81 STI, unable to keep pace, gets passed by the faster field and is in 8th place until Brian Deegan hit a barrier hard and forced a red flag and a restart of the race. GRC rules dictate that cars do not retain their position for a red flag restart, instead they default to the original starting grid putting both Subarus in the back.

Lasek was rear ended by Steve Arpin in turn four, causing a spin and stays in 5th place for the middles laps. #81 keeps losing ground and gets passed by teammate Sverre Isechsen who finishes 6th. Lasek finishes in 7th place.

The top cars of Patrik Sandell, Joni Wiman and Ken Block led prior to the red. After the restart, Block launched off the line quickly and moved into the lead. Block was never challenged over the final four laps and secured the victory. Ken Block wins his second round of the season followed by Patrik Sandell in second place and Nelson Piquet Jr. in third.

Next up for Red Bull Global Rallycross Championship will take place at Bell Isle in Detroit, Michigan. The race will be broadcast live on NBC Saturday July 25th at 2PM EST and Sunday July 26th at 4:30 EST. Stay tuned to see how the #11 and #81 2015 Subaru WRX STI Global Rallycross cars do in the fifth round.