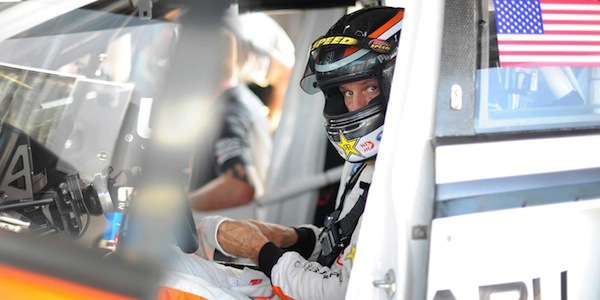 The two 2015 Subaru WRX STI Global Rallycross cars were nowhere to be found at the Final GRC Daytona yesterday. What happened to SRT USA?
Advertisement

After Tanner Foust won the exciting Final at Red Bull Global Rallycross Daytona yesterday, he said, “Everyone has upped their game this year and the competition is very tough.” Foust driving the VW Beetle was happy to be in the Final, let alone win it. The intense second place race between Austin Dyne and Sebastian Eriksson was a photo finish at the line and had the fans pumped.

The Final saw intense action right from the start as favorite Ken Block started slow and immediately took the Joker to try to stay at the front. He got tangled up with Patrick Sandell and was pushed onto the grass, got sideways and hit the tires. It essentially put him out of the race and Block finished last with a blown tire. Block was visibly upset with Sandell for not giving him enough room on the first turn.

What happened to Subaru?

Day one Round one saw the two Subaru WRX STI GRC cars driven by Bucky Lasek and Sverre Isachsen battle hard, but came away with no points to show for their efforts in the first of two scheduled Heat races. Officials had to shut down competition in the second round of Heats when lightning storms passed over Daytona International Speedway. The team hoped to put up a good fight on Sunday. Sebastian Eriksson earned his first GRC victory followed by Ken Block in second and Steve Arpin to round out the podium.

With 100 points in play, it was a big weekend for the GRC teams. The story of the day on Sunday for Round 2 was the 93 degree heat, very high humidity and 140 degree temperatures inside the cars. This was a big challenge for everyone and pushed the cars and drivers to the limit.

Bucky Lasek sat on the second row in the Semi-Final Heat A, but because of some kind of mechanical failure, his #81 2015 Subaru WRX STI sat on the tarmac and could not run in the Heat. Lasek had a Did Not Start (DNS). He was eliminated from the competition.

In the Semi-Final B Heat, Sverre Isachsen started on the second row and had a good jump at the start of the race. He was in a solid third for the first few laps until getting pushed hard into the tire barrier. Isachsen battles back into third position but his #11 2015 Subaru WRX STI loses power in the last laps and he finished 4th and eliminated from the Final.

Subaru isn’t saying anything about the mechanical issues they had this weekend with the two new 2015 Subaru WRX STIs. The team is understandably disappointed again as are the fans. Next up is Round 3 for points and Subaru hopes to have a better showing at Red Bull Global Rallycross MCAS New River July 5, in Jacksonville, North Carolina. Stay tuned.