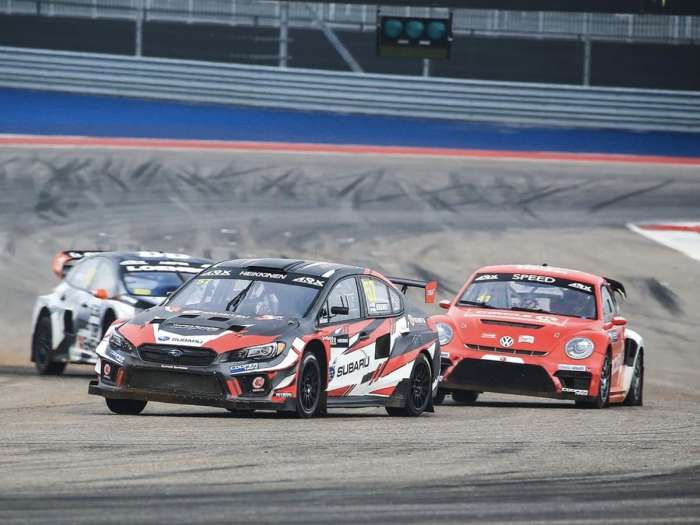 With no podium finishes in 2018, the first ARX Rallycross season was a bust for the Subaru WRX STIs. Will the beatings continue in 2019?
Advertisement

There’s an old saying, “The beatings will continue until morale improves.” Subaru continues to get beat up in Rallycross racing, their moral stays unbelievably high, and they aren’t giving up. Subaru never had a consistent winner in the now-defunct Red Bull Global Rallycross Series, and the first season of Americas Rallycross series (ARX) produces similar results. The beatings continue as the Volkswagen Andretti Beetles driven by Scott Speed and Tanner Foust continue to dominate and Subaru finishes off the podium again in the season finale. Here’s a recap of the bashing Subaru endured during the first-ever ARX season.

In the debut of the new Americas Rallycross series (ARX) took place not in America, but at the Silverstone circuit in the UK. It looked a lot like the now defunct Red Bull Global Rallycross with the Andretti Volkswagen Beetles of Tanner Foust and Scott Speed making quick launches off the line. Subaru brought three WRX STI Supercars to the event driven by Chris Atkinson, Patrik Sandell and local favorite David Higgins and the results were the same as last season.

Subaru brought three WRX STI Supercars to the Circuit of the Americas second ARX Rallycross event in Austin, Texas with the same results. Travis Pastrana, Chris Atkinson, and Patrik Sandell drove identically-prepared STIs and all had mixed results. Pastrana drove the best race of the three WRX STIs and finished the Final in fourth, while Chris Atkinson had an early flat tire and ended up in sixth. It was Scott Speed in the Volkswagen Beetle and Ken Block in his Focus RS RX who took one-two in the Final. It was Tanner Foust rounding out the podium in third place.

Subaru Rally Team USA brought a new driver and three cars to the Americas Rallycross round three at Trois Rivieres in Canada. The team made progress but they failed to make the podium again. It was Scott Speed and Tanner Foust in the Volkswagen Beetles who were at the top after the dust settled.

For the Final, Sandell was in good position in row two alongside Tanner Foust, with Atkinson behind him in row three. Scott Speed in the VW Beetle and Ken Block in the Ford Focus RS were in the front row. Sandell ran a good race but Foust passed him right out of the gate and could not catch the leaders. Sandell finished fourth behind, Speed, Foust, and Block who rounded out the podium.

The first-ever Nitro World Rallycross was not an ARX event and was organized by Subaru’s Travis Pastrana. Nitro World Rallycross was held at the Utah Motorsports Campus and it shaped up to be as crazy an event as expected. There were lots of jumps with big air and plenty of banging and crashing that characterized the weekend rallycross race. The "Hell Track for cars" sent half the field, including Pastrana, to the pits before the dust settled in the Final. The Final was banging, impacts and sheer mayhem that saw all three Subaru WRX STI Supercars finish with a DNF.

During the Final, Heikkinen and Sandell started on the last row, and despite pushing the STIs hard, they were unable to make progress through the traffic on the track. The extremely narrow and tight course made passing all but impossible leaving Heikkinen finishing fourth with Patrik Sandell following in fifth. Chris Atkinson who was not in the Final finished the event in seventh.

The first Americas Rallycross series season ended with none of the Subaru WRX STI drivers making the podium. Subaru’s 2019 WRX STI Supercars, built by Vermont SportsCar, will be back after making more improvements in the offseason. Until Subaru produces a consistent winner, the Volkswagen Andretti Beetle beatings will continue.