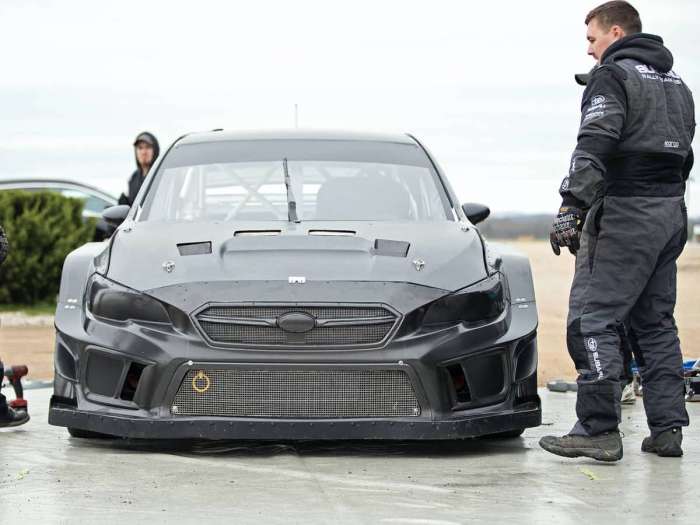 The 2018 Subaru WRX STI ARX Supercar (VT18x) runs 0-60 in less than two seconds and pumps out 600hp. Here are the complete specs.
Advertisement

How does Subaru get the WRX STI performance sedan to launch from 0-60 in 1.9 seconds and get 600hp and 680 lb-ft of torque out of the 2.0-liter Boxer engine? Subaru Tecnica International and Vermont SportsCar build the STI Supercars for SRT USA. It’s not easy keeping up with the Volkswagen Beetles driven by Tanner Foust and Scott Speed.

Subaru has been running their WRX STI Supercar in some form of rallycross since 2012 when they entered the car in the Red Bull Global Rallycross series. It was the fastest growing form of motorsport in the U.S. until it went belly up after the 2017 season. This year Subaru, Volkswagen, and Ford are running their cars in the new ARX Series.

Subaru doesn’t reveal all of their secrets for the WRX STI ARX Supercar, but on the DirtFish page, they give a few details on how they get the most from the 2.0-liter EJ20 horizontally-opposed turbo engine. Maximum weight for the whole car is limited to just 1,325kg including the driver which is no easy task.

The interior uses liberal use of carbon fiber to keep the weight down with a carbon fiber dash, door cars, and driver footplate. The body gets composite bumpers, fenders and rear doors, composite under-floor protection, and a carbon fiber rear wing. In order to save weight and handle the extreme contact the supercars endure on the track, Subaru uses a polycarbonate front windshield, side, and rear windows.

To pump out 600hp and get 680 lb-ft of torque out of the 2.0-liter Boxer engine, all rallycross cars use an ARX mandated 45mm Restrictor Garrett Motorsport Turbocharger. The four-cylinder Subaru Boxer engine management is handled by a Cosworth Pectel ECU. Exhaust is routed through a Dog Fabrications custom exhaust manifold and stainless steel 4-inch quick-change system.

In order to cool the 600hp Boxer turbo engine, it uses a rear-ducted PWR radiator and a front-mounted and ducted PWR intercooler. In order to handle the gravel, high jumps and then running on pavement, Subaru uses a Reiger competition suspension connected with custom tubular front and rear cross members, suspension arms and links, and hubs and spindles all custom built by Vermont SportsCar. The extreme stopping power is provided by massive Alcon 350mm brakes in the front and Alcon 320mm brakes in the rear and Endless brake pads. Vermont SportsCar built a custom hydraulic handbrake for the drivers as they navigate the tight corners.

Justin Trocano wrote on September 8, 2018 - 9:58am Permalink
I am surprised they even let this much detail out about their cars. One of the coolest race cars in the world.