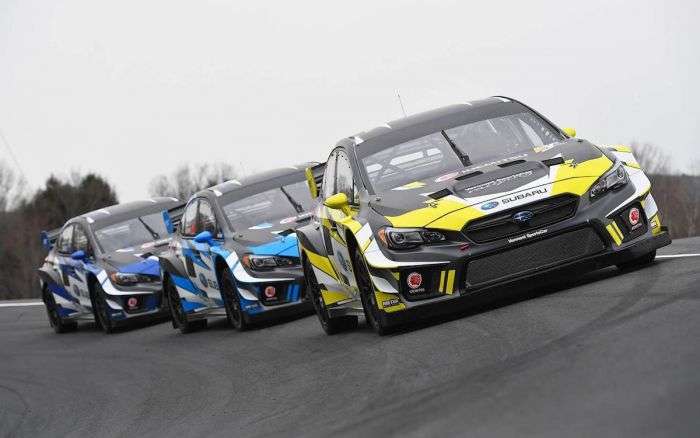 Subaru will enter three 2018 WRX STI Rallycross Supercars in the new ARX series. See who the #3 driver is.
Advertisement

Subaru is making a big splash in the new Americas Rallycross Championship (ARX) Rallycross series. Subaru announced today they will attack with three 2018 Subaru WRX STI Supercars this weekend when it kicks off at Silverstone circuit in the UK. Subaru’s Rallycross drivers from last season, Chris Atkinson, and Patrik Sandell will be joined by SRT USA Rally champ David Higgins who is from the UK.

Vermont SportsCar is again Subaru’s racing partner, preparing the three 2018 Subaru WRX STI Supercars for competition this season. The four rounds will include May 26-27 - Silverstone, UK, round 2 TBA -USA, round 3 August 4-5 - Trois Rivieres, Canada, and round 4 Sept 29-30, Circuit of the Americas, Austin, Texas.

Subaru of America announced Sandell and Atkinson will be behind the wheel at all four ARX rounds and says the team intends to alternate the driver of the third team car between David Higgins, Travis Pastrana and other drivers yet to be announced.

Subaru ditched Red Bull Global Rallycross after the popular series shut down because of poor management and unpaid bills. Fans will also see the Volkswagen Beetles driven by former GRC champions Scott Speed and Tanner Foust battling the Subaru WRX STIs in the new ARX series. The intense action will happen on a global stage in the UK this weekend. Fans can watch LIVE via Livestream at the ARX Facebook page followed by highlights shown on CBS Sports airing on the Wednesday following each race.