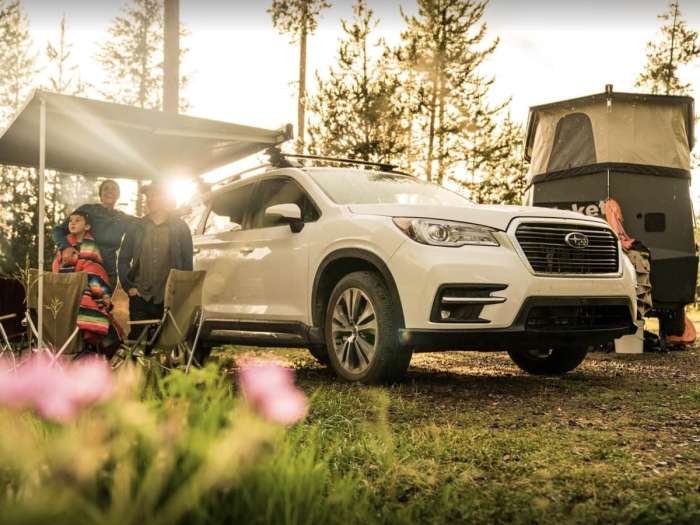 The all-new Subaru Ascent helps deliver another record month for the Japanese automaker. See what popular Subaru nameplates were down in sales.
Advertisement

It was the best month ever for Subaru of America’s largest vehicle. The new 2019 Subaru Ascent family hauler was built just for North Americans and they are responding in a big way. SOA sold 5,859 of the all-new 3-row Ascent SUVs last month to help the brand record their best September ever. The Camden N.J. automaker sold 4,235 of the all-new 3-row Ascent SUVs in August, 4,589 in July, and 1,897 in June for a total of 16,580 so far this year.

The new Ascent family hauler is the largest vehicle the Japanese automaker has ever built and customers are responding to the new 3-Row all-wheel-drive vehicle. The Ascent has helped SOA now record an amazing 82 consecutive months of yearly month-over-month growth and well on their way to their 10th consecutive year of sales records if it continues.

If it weren’t for the new Ascent, Subaru would have broken their streak of consecutive months of yearly month-over-month growth. The Subaru Forester was the only other nameplate in the Subaru stable that saw positive sales growth (+1.4%) over the same month last year. Even Crosstrek, that has been on fire in 2018, was down -0.9 percent in September. Outback, the brand’s number one selling nameplate, was also down a surprising -21.0%.

Subaru is also counting on the all-new fifth-generation 2019 Forester to keep the momentum going as it has begun arriving at Subaru showrooms this month. It gets the new Subaru Global platform with many upgrades underneath for improved driving dynamics, a larger cabin and standard EyeSight driver assist safety system.

Tom Doll, President, and CEO, Subaru of America, attributes size and safety to the new vehicle's popularity. “It’s no surprise people are flocking to the new Ascent with its winning combination of size, safety, and versatility.” Size does matter as the large family hauler helped the brand hit another record sales month.