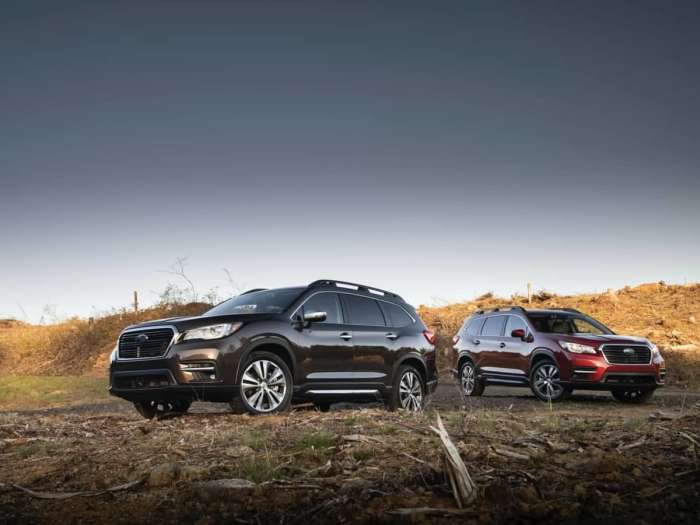 The all-new Subaru Ascent is the 3-Row families wanted, it helps deliver the best month ever in the U.S. See what other two nameplates helped the brand.
Advertisement

When Subaru axed the Tribeca SUV after the 2014 model year, they came up with the largest SUV the brand has ever produced to replace it, and it’s hot right out of the gate. Families have responded favorably to the all-new 2019 Subaru Ascent 3-Row and it helps Subaru of America achieve the automaker’s best month ever in the history in the U.S.

Families are responding to the new 3-Row from Subaru. Subaru of America (SOA) sold 4,235 units of the new 3-Row family hauler in August and 10,721 units now year-to-date. The new Ascent crossover was designed in Japan, and it’s what North American Subaru dealers and consumers have been asking for. Subaru dealers in the U.S. told Subaru Corp the new Ascent needed to be larger than the Japanese automaker originally had planned and they listened.

Two other nameplates were also up in August helping SOA achieve their all-time best sales month. The Subaru Impreza sedan and 5-Door compact models also had their best August ever with sales of 8,154 units increasing 9.3 percent over August 2017. BRZ sports coupe was up with sales increasing 13.7 percent (383 units) over the same month in 2017.

Subaru is also counting on the all-new fifth-generation 2019 Forester to continue to drive sales momentum, when it arrives this fall, and help the Japanese automaker finish the year with record sales for the 10th straight year.

The new 2019 Ascent 3-Row family hauler allowed Subaru to enter a whole new large vehicle segment they've been missing until now, competing with the Toyota Highlander, Nissan Pathfinder, Honda Pilot, Mazda CX-9, and American entries like the Ford Explorer, Chevy Traverse, Dodge Durango and Jeep Grand Cherokee. It allows their current customer base of young millennials to move up in size as their family grows, and the brand is also seeing many Ascent buyers trading in vehicles from the completion.

Dups wrote on September 5, 2018 - 12:47pm Permalink
Why is this website so Subaru bias? There is always a Subaru on the first page of this site. I owned two of them, they are not that special.
John Goreham wrote on September 5, 2018 - 4:18pm Permalink
Because we are darn lucky to have not just the best Subaru writer in America, but also the hardest working. The rest of us covering other brands are trying to keep pace, but the guy is amazing. I'm completely serious.
Ed B wrote on September 6, 2018 - 9:32am Permalink
I agree with John, Denis is seriously committed to covering the brand and it's no easy thing to publish the sheer number of articles Denis does. As for the article, I'm torn as an avid Subaru enthusiast who owns a 2017 Forester XT. I won't buy a 2019 Forester due to the one size fits all engine approach they took - which I strongly dissagree with despite the reasons noted by the company. My concern with the Ascent is the power, I'm not sure 260HP is enough. That engine will probably do well in the 2020 Outback and Legacy with the new platform - if Subaru decides to offer the engine on those models. I can only guess they will since the H6 engine will be history. However, until I test drive an Ascent and run it through its paces, I won't make a move from my XT.