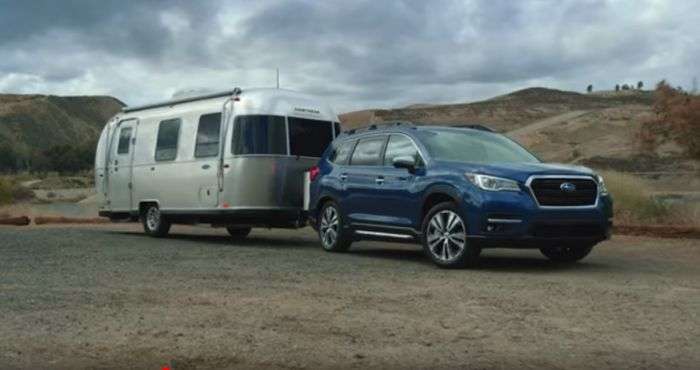 Subaru is projecting healthy sales of their new 2019 Ascent 3-Row. Will it outsell Impreza and Legacy?
Advertisement

Subaru is banking on this year's U.S. introduction of the Ascent large-size crossover to go over big with consumers. The 2019 Subaru Ascent, which just entered production in Indiana, is the brand’s new nameplate that takes the Japanese automaker into a segment where it currently doesn't compete and could expand its customer base.

Subaru is still forecasting its 10th straight year of record sales in the U.S. thanks to the new Ascent family hauler. Subaru Indiana Automotive (SIA), where they build the new Ascent, produced 342,000 vehicles last year, and with the addition of the new family vehicle, will produce about 400,000 vehicles annually. The new Ascent could out-sell the Subaru Impreza (86,043 units) and Legacy (49,837 units) that are also built in Indiana.

Ascent will come with Subaru’s “go-anywhere” attitude and is powered by the brand’s all-new direct-injection turbocharged 2.4-liter FA24 boxer engine developing 260hp and 277 lb-ft of torque. Fuel mileage estimates come in at 21/27 city/highway mpg and 23 combined mpg. It comes with 8.7-inches of ground clearance, X-MODE with Hill Descent Control, and standard Symmetrical All-Wheel Drive. The Ascent is designed for active families and the new 3-Row vehicle can tow up to 5,000 lbs.

Ascent won’t be sold in Australia, Europe, Japan or any other global markets. It’s Subaru’s biggest vehicle they’ve ever produced and it’s designed for North American families. The new 3-Row will hold up to 8 people, comes with up to 86.5 cubic feet (with all seats folded) of cargo space, up to 153.5 cubic feet of passenger space, under-floor storage, an available power rear gate, and 60/40-split flat-folding rear seats.

The new 3-Row 2019 Subaru Ascent allows Subaru to enter a whole new large vehicle segment the’ve been missing until now. It allows their current customer base of young millennials to move up in size as their family grows, and the brand is also expecting many of Ascent buyers to be conquests from other brand’s vehicles.

Shannon wrote on May 12, 2018 - 8:54am Permalink
The new Subaru Ascent can outsell the Legacy and Impreza combined if they can produce enough of these cars.
DJ Cordes wrote on May 12, 2018 - 10:34am Permalink
All these “full size crossovers” that tow a meager 5k. Totally useless as my 2007 V8 4Runner tows 7k which I need. I’m probably going to have to replace it with a Jeep.