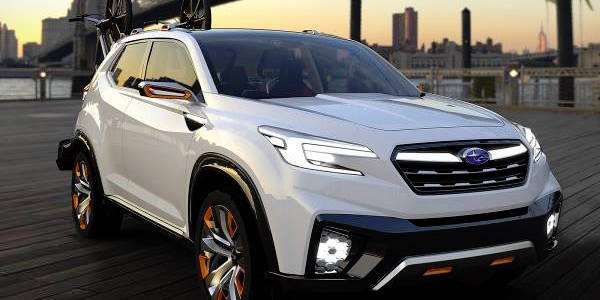 Subaru’s New 3-Row Crossover Spied, What You Can Learn From it

Subaru’s new 3-Row Crossover has been spied. What can you learn about it?
Advertisement

Let’s make it clear. The new 3-Row, 7 passenger SUV is not a replacement for the discontinued Tribeca. This will be an all-new multi-purpose vehicle from Subaru for the US market only. Tribeca was a global car sold in North America, Australia, Europe, South America, China, and parts of Southeast Asia. This new Subaru 7-passenger SUV will be built in the US for North American consumers.

The new crossover will be built in Lafayette, Indiana alongside the new 2017 Impreza and will be underpinned with the new Subaru Global Platform. It will be the largest Subaru ever offered in North America. Production on the all-new model will begin in 2018 and will likely be launched in the US in late 2018 or early 2019. It will likely make it’s debut in North America at either the 2017 New York Auto Show or the North American International Auto Show in Detroit.

The Subaru SUV was seen testing in the mountains at high altitude where their strongest markets are located, in the Rocky Mountains, the Cascade Range and mountains of the Northeast. The heavily camouflaged vehicle shows the new Subaru design language with hawkeye headlights and the signature Subaru grille up front. The new SUV will be bigger, wider, longer and will easily accommodate the third row which will be standard on the new vehicle.

The New 3-Row crossover could be named Ascent 7 which Subaru has recently filed trademarks for. There’s no word yet on powertrains or whether a hybrid version will be available, but we know the new Subaru will be powered by a new-generation boxer engine, likely a 3.6-liter 6-cylinder. It will also come standard with Subaru’s Symmetrical all-wheel-drive, it will get the latest safety equipment, and be an IIHS Top Safety Pick when it arrives.

LG's New EV Battery Plant Is a Welcome News for Tesla
Tesla Giga Berlin's New Hurdle: It's Not Only the Gov't, but Now Tesla Itself
END_OF_DOCUMENT_TOKEN_TO_BE_REPLACED