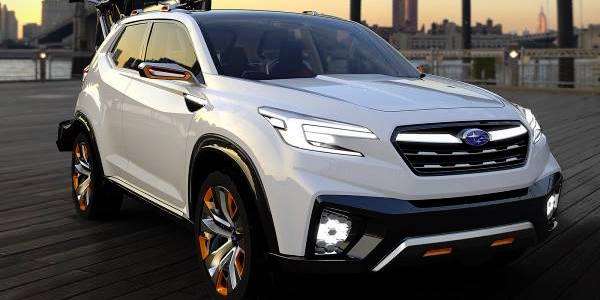 Subaru has a new plant, a new 3-Row crossover and a new global platform coming. How will all three benefit families?
Advertisement

It’s still two years away, but the new Subaru 3-Row Crossover gets closer with the plant expansion in Indiana underway. Subaru of Indiana, Automotive (SIA) cut the ribbon on the new paint shop at the plant yesterday. It’s another step forward to building the new-generation 2017 Impreza late this year and the new Subaru 3-Row crossover in 2018. Both will be built at the plant in Indiana, and both will ride on Subaru’s new Global Platform. How will this benefit SUV buyers?

The paint shop is part of the expansion of SIA’s facilities that began in 2012 with the goal of increasing production capacity at Subaru’s only plant outside of Japan. SIA says the new paint shop will allow them to increase vehicle production by nearly 100,000 units annually. This will help reduce the wait time for all of Subaru’s vehicles that are in high demand. The expansion also includes additions to SIA’s engine and stamping facilities. There’s also a new global architecture coming.

All new-generation Subarus will ride on a new platform

Subaru’s new Global Platform will first be introduced on the Impreza and Crosstrek, and then Forester, Legacy and Outback. Executive Vice President of Fuji Heavy Industries, Takeshi Tachimori, told motoring.au in Geneva that all of Subaru’s symmetrical AWD platforms will be renewed for the next generation. One platform will benefit the company by reducing development costs. How will this benefit consumers?

The new Subaru 3-Row crossover, that is replacing the retired Tribeca, will also ride on this same Global Platform. This will benefit 3-Row crossover buyers by keeping production costs down and will ultimately translate to keeping the purchase price down. The new architecture will also allow for a roomier interior without making the outside dimensions larger. Tachimori says, “It’s scalable because basically Impreza, Crosstrek and Forester are using almost the same platform size, while Legacy and Outback are a little bit bigger. By utilizing the common engineering design we can with some adjustment, make it for the bigger 3-Row crossover.”

The paint shop is the beginning of more expansion to come

The plant expansion in Indiana will be designed so the new platform will be ready for the new Impreza compact sedan and 5-door models beginning production in late 2016, and this new crossover in 2018. Legacy and Outback, also built at the Indiana plant, will be next in line for the new underpinnings.

The all-new Subaru 3-Row crossover will be a larger vehicle than the Tribeca, with full third-row capability. We know it will feature Subaru’s Symmetrical AWD and a boxer engine. It will also fit with the automaker’s recreation-focused branding. The new crossover won’t be sold in any other global markets and is designed for North American consumers. The new vehicle has not been named yet, but it could be called either one of these recently patent-filed names: Ascent 7, Sojourn, Venterra and Cypress. Stay tuned.

pepe wrote on April 21, 2016 - 1:33pm Permalink
Not in Europe.... OK, I finish with Subaru. I do like my Forester MY 2014. But I want bigger one model (not Outback). So I'm going to change car brand...
PulSe wrote on September 22, 2016 - 10:09pm Permalink
Pepe - I'll trade you one of these for a Levorg. (we can't get the Levorg here)
Beatris wrote on November 14, 2018 - 1:21am Permalink
A person necessarily lend a hand to make critically articles I'd state. That is the first time I frequented your web page and so far? I amazed with the research you made to create this actual post amazing. Fantastic job! 더킹카지노
Art Levine wrote on January 4, 2017 - 8:02pm Permalink
I am a kayacking grand pa. My Oldsmobile 1989 had three roomy seats and got maybe 13 mpg. I just bought a Mitsubishi V^6 with a Thule Blade roofrack Outlander gt 7 passenger. I get about 27 mpg hwy 17 mpg city. It is feature rich and the fosgate sound system is amazing
Ronald Lyles wrote on November 7, 2016 - 11:17am Permalink
I agree, I like the Subaru Forester but I want a bigger one!