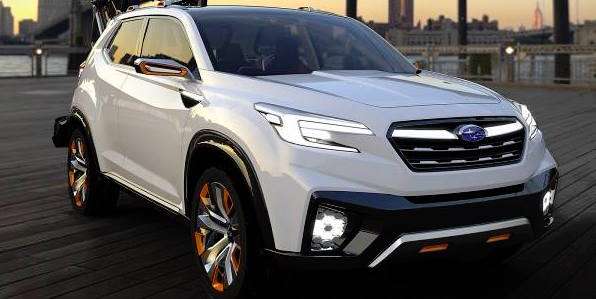 Do you like any of these recent patent-filed Subaru 3-Row crossover names?

Subaru has filed to protect 4 names with the U.S. Patent office. Do you like any of them for their new 3-Row crossover?
Advertisement

Subaru says their new 3-row crossover has not been named yet, but the Japanese automaker has filed to protect a few potential names at the U.S. patent office. Subaru wants to keep the name consistent with their other successful vehicles: Forester, Outback and Crosstrek, all of which have names synonymous with outdoor adventure.

Thanks to AutoGuide, we’ve learned there are four names Subaru has filed to protect with the U.S. Patent and Trademark office recently. The four names are Ascent 7, Sojourn, Venterra and Cypress. Any of these could be the new name for Subaru’s 3-row crossover that will be built at Subaru’s U.S. plant in Lafayette, Indiana starting in 2018.

Subaru unveiled the VIZIV Future Concept at the Tokyo Motor Show and while concept vehicles rarely make it to production as they appear at the shows, the exterior styling cues could give Subaru fans an idea of what their new 3-row crossover vehicle could look like. The Subaru VIZIV Future Concept is built for recreation and that’s where Subaru made a mistake with the outgoing Tribeca. It didn’t fit the recreation-focused branding for Subaru. The name on the back is important as it will convey what Subaru wants the new 3-Row crossover to be about.

Are any of Subaru's 4 recent Patent-filed names synonymous with recreation, getting away from civilization and outdoor adventure? Ascent 7 certainly does, and conveys a climb to the summit of a mountain. Sojourn means “a temporary stay” and that would not be what Subaru has in mind for this new crossover. Venterra is a French word and means to fly and flutter in the wind. Cypress is an evergreen coniferous tree with small cones.

We are guessing Subaru Ascent or Ascent 7 is the best name that conveys the core value of recreation-purposed vehicles Subaru has been successful with here in the U.S. It certainly fits the brands active lifestyle lineup with Forester, Outback and Crosstrek. The new 3-row crossover won’t be sold in any other global market and is designed for North American consumers.

Like the VIZIV Future Concept, Subaru wants this new all-wheel-drive 3-row crossover to motivate buyers to “get out and get active.” That’s what is driving the brands other models to record numbers in the U.S. We think Subaru Ascent or Ascent 7 is the best name for their new 7-seat all-wheel-drive vehicle. What name would you choose?