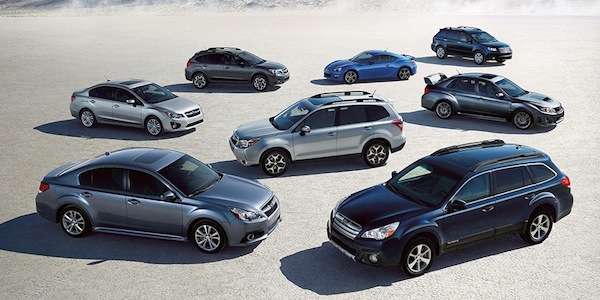 When it comes to the most affordable all-wheel-drive all-weather vehicles, KBB thinks Subaru is the best. Not just one Subaru, but they scored the Japanese niche market automaker’s cars in the top five spots in their latest “10 Best AWD Cars and SUVs under $25,000” list. Subaru scores the 2014 Subaru Forester, 2014 XV Crosstrek, 2014 Impreza, 2014 Legacy and 2014 Outback.

It shouldn’t be a surprise, because that’s what Subaru does best, they have the best all-wheel-drive hardware on the planet. Subaru only has one car that doesn’t have it, and that’s the rear-drive BRZ sports car. Subaru is an automaker who produces, passenger cars, SUVs and crossovers equipped as standard with their excellent Symmetrical all-wheel-drive.

Because of the extensive solar vortex that has hit the U.S. this winter, Subaru is getting more attention lately. But Subaru has been producing one of the best all-wheel-drive systems in the world since the 1950s. In the 56 years Subaru has been producing vehicles, the production total has just recently reached 20 million units. Subaru is selling their multi-use vehicles and have created a niche market with their all-wheel-drive SUV’s and crossovers.

The editors at Kelley Blue Book (KBB) picked their top ten affordable new AWD vehicles. They scored Subaru models the highest of all the vehicles out there and they hold the Top Five spots. Most drivers think that all-wheel-drive is just for those who live in cold-weather climates, but AWD will also improve drive-ability and traction on dry surfaces too. It also gives the driver better confidence in the car in all situations.

For 2014, KBB found there are plenty of all-wheel drive models available for less than $25,000, but Subaru produces the best all-weather cars, SUVs and crossovers on the market today. The 2014 Subaru Forester small SUV, XV Crosstrek crossover, 2014 Impreza compact, 2014 Legacy sedan and 2014 Outback wagon are all scored the best on KBB’s list.

And Subaru doesn’t just build a “one size fits all” All-wheel-drive system. Subaru’s Symmetrical All-Wheel Drive is a comprehensive system that includes a lightweight horizontally opposed Subaru Boxer engine and a full-time automatic torque distribution system. Subaru builds four different versions of Symmetrical All-Wheel Drive and then tailors it to a particular powertrain or model. But what makes the Subaru Symmetrical AWD the best?

Some automaker’s AWD systems on the market function passively, transferring torque away from the main drive wheels only when they slip. When there is no slippage, vehicles equipped with such systems essentially operate in two-wheel drive. Although such automatic “part-time” or “on-demand” systems can help a vehicle traverse a snow-covered road, for example, they may not provide the all-road handling benefits of a true full-time All-Wheel Drive system like Subaru’s.

Subaru develops their muti-use vehicles around Symmetrical All-Wheel Drive, they don’t adapt AWD components to a front- or rear-wheel drive vehicle. All versions of Subaru Symmetrical All-Wheel Drive distribute torque to all four wheels all the time, reducing the load on each wheel and reducing and even helping to prevent tire slip, especially on slippery or loose surfaces. The rally-bred 2015 WRX STI gets a special system called Driver Controlled Center Differential (DCCD) that provides even more grip on wet and loose surfaces.

KBB found out Subaru has the best all-wheel-drive hardware on the planet. They have given the nod to Subaru and scored the 2014 Subaru Forester small SUV, XV Crosstrek crossover, 2014 Impreza compact, 2014 Legacy sedan and 2014 Outback wagon as the Top Five n their latest “10 Best AWD Cars and SUVs under $25,000” list.