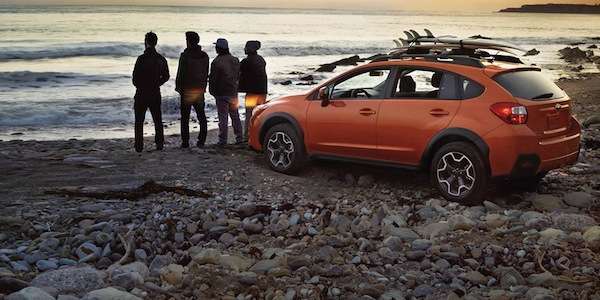 Three reasons Subaru is stealing the spotlight from big automakers

Subaru is moving up in their brand perception, and it’s due in part to new cars like the 2014 Subaru Forester and 2014 XV Crosstrek. How are they doing it?
Advertisement

The 2014 Subaru Forester and 2014 XV Crosstrek are selling fast for the Japanese automaker and they are moving up in their brand perception with all their vehicles. What is Subaru doing to attract new buyers at a record pace? In a recent article from CNBC, there are a number of factors that are contributing to Subaru’s record growth and their strong brand perception.

In their annual survey of brand perception for the auto industry, Consumer Reports, says that the Subaru brand jumped seven spots from last year's survey, to No. 6. It was the biggest year-over-year jump in the annual rankings of any automaker. This is a big jump for the Japanese automaker but they aren’t an overnight success like many would think. Subaru has been on a steady pace for many years to the success they are experiencing now. What have they been doing?

Subaru has one of the lowest “cost of ownership” of any automaker. The latest study from Kelley Blue Book, shows Subaru ranks number two on the list only behind Mazda as the brand with the lowest projected costs over the first five years of ownership. The KBB survey shows Subaru now ranks ahead of Toyota who is number three on the list. The KBB study looks at seven categories that include including depreciation, estimated fuel costs and insurance premiums.They then calculate the total costs over the next five years. Subaru is building quality cars and consumers are taking notice.

The safest cars on the planet

It’s no accident that Subaru keeps rolling out new cars that make the IIHS Top Safety Pick list. The 2014 Subaru Legacy, Outback, Forester, Impreza and XV Crosstrek make the new list. It is the safety standard by which automakers measure how safe their cars are, and Subaru is no stranger to the IIHS safety awards. Subaru is the only automaker in the world with the distinction of earning IIHS Top Safety Pick awards for every model it builds and has done so four consecutive years. The CNBC reports says, “Yes, Subarus are not known for being edgy or eye-popping, but what they lack in sex appeal they make up for in safety and quality.”

The CNBC report says that “after years of steadily building sales on the back of reliable but rarely spectacular-looking models, Subaru is finally turning heads on a broader scale.” Subaru is still behind rivals Toyota and Honda, but have moved way up in brand perception with consumers.

Subaru is building its brand perception the best way possible, by word of mouth. Jeff Bartlett, deputy editor of autos at Consumer Reports says, "Subaru has become the smart choice for many car buyers, It used to be when you asked people what car to buy, they would say, 'buy a Toyota or 'buy a Honda, but now people are saying, buy a Subaru."

Tiny Subaru is stealing the spotlight from the big automakers by building quality multi-use vehicles like Forester, XV Crosstrek and Outback that are safe and consumers are taking notice and telling their friends. Bartlett said. "These guys are now known for consistently building safe models, and that's creating a lot of word-of-mouth recommendations."

What looks like an overnight success for Subaru, has been years in the making of doing what Subaru does best. They’ve created a niche market for their dependable and safe all-wheel-drive vehicles like the 2014 Subaru Forester and 2014 XV Crosstrek that are leading the lineup in sales. And they are attracting a new generation of active buyers to the brand.

Ravens Watch wrote on June 12, 2014 - 11:46am Permalink
Major problems are being reported for the Subaru Crosstrek by owners across the country including poor paint quality, poor interior quality, fuel mileage that is almost 20% lower than what Subaru reports and worse yet, some owners have high oil consumption of one quart for every 1,500 miles. People need to do some serious research before buying a Subaru!
Joe B wrote on November 17, 2015 - 10:24am Permalink
I have heard about many unhappy brand new Subaru owners complaining about oil consumption problems recently. Subaru is really doing nothing about it. Cost of ownership is easy to calculate when a car is new, however tell me what it costs to own one between 60 k and 90k miles. you can drive a Honda or Toyota for many reliable years after it is paid for. I can prove it.