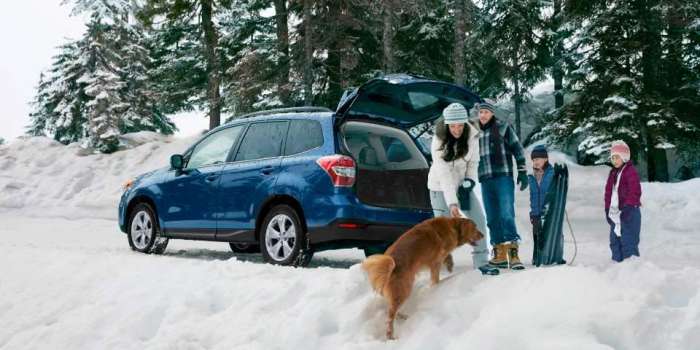 Subaru has set an all-time sales record for 2013 as new buyers snatch up 2014 Forester and 2014 XV Crosstrek.
Advertisement

The Subaru brand is running circles around the other automakers and they are doing it by bringing new buyers into their showrooms. New buyers are discovering the Subaru brand and are snatching up the all-new 2014 Forester SUV and 2014 XV Crosstrek crossover almost as fast as they can build them. Subaru has reported they set an all-time sales record for 2013 with 424,683 vehicles sold. It exceeds the 2012 record by 26 percent. This is the fifth consecutive all-time best sales year and December was up over last year again.

How does Subaru keep doing it? It’s really no surprise as we’ve watched them set new records every month this past year. We should have purchased Subaru stock five years ago when they were a brand that was about to explode. Subaru is attracting new buyers to the brand at an explosive rate. Over 60% of Subaru customers in 2013 were new to the brand. This is an astounding number.

Subaru has done it by staying true to their core values that many have laughed at over the years. They build multi-use all-wheel drive vehicles that are designed for a unique buyer and a niche market. They have appealed to those in the North East, North West and western United States regions to people who use their vehicle for multi-purpose who live in cold weather climates. But that is all changing as Subaru is attracting new buyers.

Subaru says that sunbelt sales grew by 45 percent in 2013 and most of those are first-time Subaru buyers. Where Subaru is picking up a majority of those sales is with the all-new 2014 Forester SUV and 2014 XV Crosstrek crossover. Both these vehicles are being purchased by a new millennial generation who is drawn to the brand due to its multi-use abilities. Subaru has targeted their ads to a younger generation who are embracing the brands philosophy.

Subaru is promoting the go-anywhere independent attitude of their vehicles, and their ability to provide safe transportation and it’s appealing to those with active lifestyles. Both Forester and VX Crosstrek keep the focus on that niche market that made the company successful in the past. Then they make these new buyers feel like a part of the family after they make the purchase. Instead of offering discounts, Subaru donates a part of each purchase to a charity of the buyers choice which is also resonating with a younger generation. Subaru reports they donated another $10 million to charities across the country. It’s called “Share the Love.”

Subaru isn’t about to shift its focus now. There is an estimated 80 million millennials in the U.S. alone and Subaru estimates 6 million of those fit their target demographic to buy their multi-use vehicles like the new Forester and XV Crosstrek models. “So, why, would the company need to shift its focus away from them?, a company executive stated at the LA Auto show in November.

How does Subaru keep setting new records month after month and year after year? By giving buyers what they want. A safe, multi-use vehicle that is appealing to a new active generation who doesn’t want to be constrained by where they can go. Subaru has carved out a niche in the market with their new 2014 Forester and XV Crosstrek vehicles that is resonating with many new active millennials who will use their new Subaru for recreation. It’s working well for the brand, why change now? Stay tuned to Torque News for all your Subaru news.