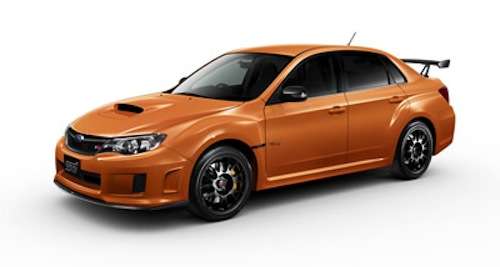 STI which is the high-performance division of Subaru has just launched the very exclusive 2013 WRX STI tS TYPE RA. Only 500 total examples will be built and those will be limited to the Japanese market. U.S. buyers and others around the globe will have to wait until the next generation model is launched later this year, but this car gives us a few glimpses of what is coming for the high-performance 2014 WRX STI.

Last year at this time, Subaru launched the Subaru WRX STI spec C that got a few extra performance upgrades. This latest example that was launched today is the next version of the performance STI and will be offered only as a four-door sedan model. It is being offered in two versions, a special Tangerine Orange Pearl finish version in which 300 will be built and 200 examples of the NBR Challenge Package variant.

STI performance upgrades from the track

The new WRX STI tS TYPE RA gets a few new performance upgrades both to the interior and exterior that sets it apart from the standard model. In order to give the exclusive model better performance, STI learned some things from their race cars that compete around the globe. These performance goodies will likely make their way to the new fourth-generation model.

STI engineers added a 11:1 ratio quick steering gear box, “6 pot” Brembo performance brakes with grooved disc rotors and special brake calipers, and STI chassis upgrades that enable the car to better hug the corners. STI says the cars is designed with a higher level of performance called "stop-turn-run", which allows the driver “to manipulate the car at will.”

Now that sounds like something performance enthusiasts can look forward to in the next-generation WRX STI that will be launched later this year. It will also feature a stiffer suspension in which it is upgraded with STI race tested coil springs, tuned rear dampers and bushings, 18-inch front Brembo rotors and 17-inch in the rear and exclusive Potenza 245/40R 18 inch performance tires.

tS TYPE RA gets upgrades inside and out

The exterior of the performance sedan receives treatments like an STI front spoiler, a tS badge on the front and TYPE RA badging on the rear. It also gets an STI badge on the Front and sides of the car. Two other exterior colors will also be offered, a Satin White Pearl and WR Blue Mica.

The Interior also gets special features that set it a part with an exclusive leather-wrapped steering wheel with red stitching, leather-wrapped shift knob with STI logo and special fabric on the front seats with STI black logo embroidery and stitching. An exclusive side sill plate with tS logo rounds out the interior treatments.

No changes have been made to the WRX STI powertrain, and both models feature the Japanese-spec turbocharged 2.0-liter four-cylinder engine rated at 305 horsepower. Final drive is sent to all four wheels via a six-speed manual gearbox. We expect the fourth-generation model to be get more power.

Orders for the Japanese only 2013 WRX STI tS TYPE RA will begin August 25 for the Tangerine Orange Pearl finish model and December 23 for the more exclusive NBR Challenge Package. We are getting a better glimpse of the next-generation WRX STI and it’s performance upgrades. Stay tuned.