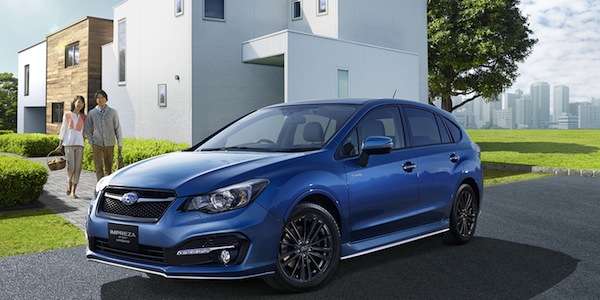 The new 2016 Subaru Impreza Sport Hybrid will follow the XV Crosstrek Hybrid that was launched globally back in 2013 as a 2014 model. The Impreza hatchback hybrid will also feature a gasoline/electric hybrid powertrain. In the XV Crosstrek, the electric drive motor augments the 2.0-liter Boxer engine that generates 160 hp and 163 lb. ft of torque. That’s an increase of 12 hp and 18 lb. ft of torque over the standard XV 2.0-liter engine.

The new Impreza Sport hybrid should see the same power numbers and possibly get even better fuel mileage than the XV Crosstrek Hybrid’s 31 mpg combined, 27/36 city/highway. Subaru will release power and fuel mileage specs on the new compact hybrid closer to its launch later this summer. The hybrid drivetrain will be mated to a continuously variable transmission (CVT) coupled with Subaru’s Symmetrical all-wheel-drive system.

While Subaru intended this to be for it’s all-weather capability, it also works on dry roads while pushing hard through the curves. This unique system takes input from acceleration, steering angle and yaw rate sensors, and the Active Torque Split AWD optimizes traction and steering response when...read more.

Like the XV Crosstrek hybrid, the new Impreza Sport Hybrid’s CVT will include a manual mode with steering wheel paddle shifters which will give it sportier driving dynamics. The hybrid system will use a nickel-metal hydride battery and it will be strategically located low in the vehicle, which will contribute to greater handling agility. Impreza Sport hybrid will likely get a a quicker-ratio electric power steering and special suspension tuning for better cornering ability like the XV hybrid.

Impreza Sport Hybrid will come with Subaru’s new-generation EyeSight that uses a stereo camera to recognize objects and distance for their pre-crash braking and cruise control functions. This includes a speed tracking function, mis-active lane keeping and rear vision suppression control. The new EyeSight version 3, will feature a new brake lamp recognition control that takes EyeSight’s cognition abilities even further. Subaru will be introducing this technology in the new Impreza hybrid.

Subaru will now have two hybrid all-wheel-drive vehicles in the lineup. The 2016 Subaru Impreza Sport hybrid will begin arriving in Subaru showrooms in Japan this summer. Subaru will likely launch the new Impreza hatchback hybrid in other global markets next year. Stay tuned.

danwat1234 wrote on May 19, 2015 - 4:28pm Permalink
So it's still a mild hybrid like the regular XV Crosstek? It uses a second lead acid battery for cranking the engine! No other hybrid has 2 lead acid batteries, and the fuel economy isn't much better than the regular version. I'm waiting for a REAL sport hybrid from Subaru.
Alice Alicerson wrote on May 21, 2015 - 12:48pm Permalink
Same danwat. What was the hold up anyway? I'd preferably like to buy a subaru hybrid for my next car but they are all in the later years, high priced. Now I will have to get a pzev (oil dependent) or a hybrid from another company that is less than friendly to the environment unlike subaru. OOOH well.
danwat1234 wrote on May 22, 2015 - 8:45pm Permalink
I agree! Maybe in a few more years. I have my eye on a used red Chevy Volt but wouldn't mind a nice AWD plugin hybrid or fully electric. Maybe Tesla will be gold with their next generation car.