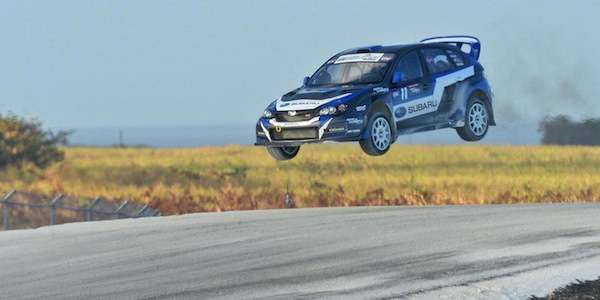 Global Rallycross Top Gear Festival Barbados results are in and it was less than a party for the 2014 Subaru WRX STIs.
Advertisement

There are new 2014 Subaru WRX STIs with a new livery for the 2014 Global Rallycross Top Gear Festival in beautiful Barbados, but with disappointing results. The same drivers, Sverre Isachsen and Bucky Lasek brought about the same results as we saw last year. It should have been a party in Barbados, but it turned out to be less than spectacular for the Subaru Global Rallycross team.

The event was not televised live for Global Rallycross fans, so we are getting the news second hand from Subaru Motorsports. It was the normal practice and qualifying on Friday and Saturday and there was one heat race Saturday afternoon. The race fans that attended the event live were having fun! It started with a showdown between Ken Block in his Global Rallycross Ford Fiesta ST and Lewis Hamilton’s Mercedes-AMG Petronas F1. A link below will take you to that video. But the huge crowd loved it!

Subaru says, Bucky Lasek drove a great heat ending in 3rd, while teammate Sverre Isachsen suffered a dramatic blowout during the same race on Saturday. On Sunday, Isachsen struggled in qualifying and the team couldn’t find the ideal setup. But he found success in his heat race, finishing 2nd overall to advance straight to the Final. Going back to June of last season Isachsen has advanced to the Final in eighth straight events and is proving to be a good driver for the team.

Teammate Bucky Lasek, driving the #81 Subaru GRC STI, finished third in his seeding heat, but in the process experienced a critical engine problem forcing him to miss the subsequent heat races. After a very successful skateboarding career, Lasek has been less than spectacular and is struggling as he makes the transition to Global Rallycross.

Isachsen started the Final from the 2nd row of the grid and after a great launch found himself in third overall with rival Nelson Piquet JR challenging from behind. The two went on to thrill the massive crowd with incredible non-stop, door-to-door racing action, swapping positions with each other several times, bumping doors and even jumping side by side. This is what Global Rallycross action is all about, and makes it one of the most popular motorsports on the planet.

Isachsen was able to hold off Piquet JR for most of the battle, but landed heavily on the dirt jump late in the race which led to a damaged turbo, forcing him too pull off with just two laps to go. The capacity crowd roared for Isachsen as he excited his Subaru, who were entertained with his driving efforts. Isachsen’s day was over and finished in a disappointing sixth place overall.

After the race Isachsen said, “An incredible race, I fought very hard and I’m happy the fans enjoyed it! We struggled a little bit here this week on setup, driving for the first time on the new series’ tire , but I think we made some good steps forward. I'm looking forward to the next round in Austin, with the X Games, where I hope to take home another medal after earning bronze last year."

There are new 2014 Subaru GRC WRX STIs with a new livery but with the same results. Maybe it’s time for Subaru to not only upgrade their cars, but upgrade their drivers. But it was a thrilling race for the fans to see. Watch the video below.

Subaru GRC driver thrilled the fans at GRC Barbados 2014. Thanks to Bajan Blitz Motorsports for the video.