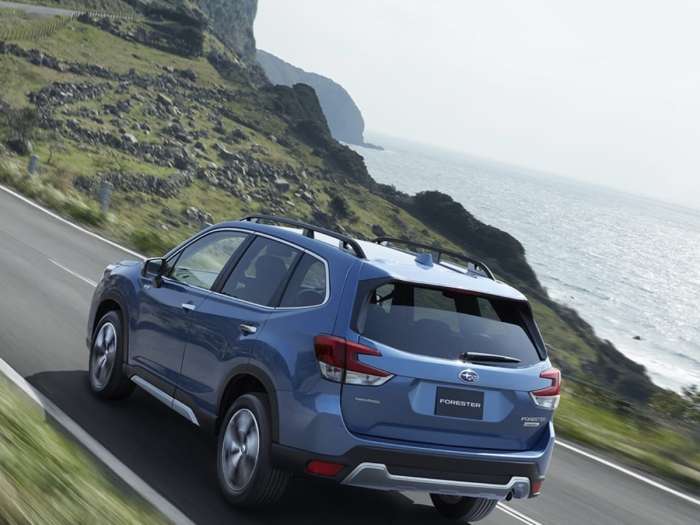 Subaru Forester Hybrid Confirmed For Australia; Why Americans Would Buy It

Subaru confirms they will launch their new 2019 Forester e-Boxer Hybrid in Australia. See why Americans would buy the new fuel-efficient Forester.
Advertisement

Subaru needs to move toward electrification and the Japanese automaker is moving toward more fuel-efficient hybrid models around the globe. They already have the new fifth-generation Forester e-Boxer in the Japan market, and just announced a new 2019 Subaru Crosstrek e-Boxer hybrid this week also for Japan. Now Subaru Australia confirms the 2019 Forester e-Boxer will launch down under. Americans would buy the new fuel-efficient Forester if the Japanese automaker brings it to U.S. shores.

According to a report from WhichCar, Subaru Australia managing director Colin Christie confirmed the new Hybrid Forester and XV e-Boxer will be heading to Australia. Christie says, “We have our own specification [Forester] in Australia and there’s a lot of testing that goes into ride and handling, but yes there is a Forester hybrid and we are working with Japan now about how and when we bring that in.”

The U.S. is getting a new second-generation 2019 Subaru Crosstrek plug-in-hybrid later this year, but the Forester and Crosstrek e-Boxer models going to Australia are mild hybrids, not plug-ins. Forester and Crosstrek e-Boxer use the newly-developed 2.0-liter direct injection engine coupled with an AC synchronous electric motor with a total output of 187 lb-ft of torque. The mild hybrid system is mated to a full-time all-wheel-drive system and Subaru’s Lineartronic CVT automatic transmission.

Christie said in an earlier interview, “The move towards electrification means we’ll have a hybrid Forester in the market by the end of next year, and a second hybrid model [XV] shortly after that in early 2020. It’s the first hybrid for Subaru in Oz and we’re really excited about it.”

Subaru has not announced fuel-mileage specs for the 2.0-liter e-Boxer hybrid models, but they will be more fuel-efficient than the 26/33/29 city/highway/combined mpg the new 2019 Forester with the 2.5-liter powerplant achieves.

Americans would buy the new Forester Hybrid if it’s priced competitively. In a recent study by iSeeCars, they found Americans are buying previously-owned hybrid and electric vehicles at a faster clip than all other models, including the most popular SUVs and crossovers. The used hybrid and electric vehicles are moving off dealer lots quicker than all other vehicles because they are more affordable than the new models.

New Subaru President Tomomi Nakamura is counting on the newly-redesigned fifth-generation Forester to help rebuild the brand's tarnished image in Japan because of the recent fuel-mileage falsification scandal that rocked the country. Forester is the Japanese automaker’s top-selling nameplate around the globe and they need the small SUV to keep sales momentum going. The Forester e-Boxer hybrid model should help spur sales in Japan, Australia, and Europe. It would also likely be popular in the US.

The 2019 Subaru Forester 2.5i gas model makes its dealer launch in the U.S. next month, but Subaru has been silent on when or if North America will get the new fuel-efficient Forester e-Boxer hybrid model. Americans will buy it if they do. Stay tuned.

Mark Salopek wrote on September 14, 2018 - 12:08pm Permalink
With the strong pre-sales numbers for the 2019 Forester e-Boxer in Japan, and the recent announcement that they will offer this model in Australia (along with the e-Boxer Crosstrek), is there a possibility that Tomomi Nakamura may reconsider Subaru’s decision NOT to offer this option in the US? In all of the online articles and reviews I've read recently concerning every Subaru offering using their new global platform (e.g. Impreza, Crosstrek, Ascent, and now the Forester), the limitation of one engine choice in the US market is by far the biggest complaint shared by everyone. In addition to this, the absence of a hybrid option only compounds this problem. Maybe it wouldn't be so bad if every engine that they decided to use had higher HP and torque ratings, but the engine choices that they ended up going with as the sole power plant in each model are under-powered, and therefore leave consumers wanting for more. Increased fuel economy would also be appreciated, and would go a long way to increasing their market share as well.
joe klugmann wrote on November 27, 2018 - 9:21pm Permalink
Nobody in US is going to buy an underpowered Forester with a 2 liter engine for most likely more money than standard Forester. The upcoming Crosstrek with low power and low storage and high cost is a big big mistake that will never sell.