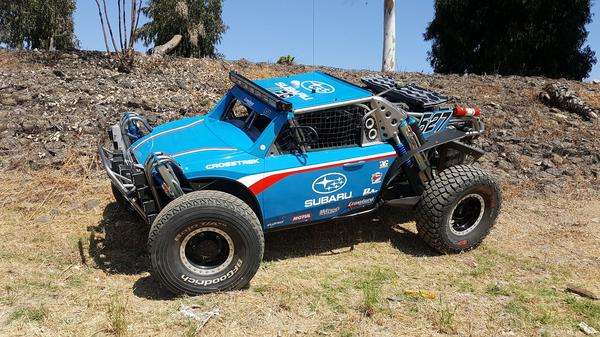 A new Subaru Crosstrek desert racer will make its Baja 500 debut this weekend. It’s a busy weekend for Subaru.
Advertisement

It will be a busy weekend as Subaru Motorsports runs in Global Rallycross, stage rally, and now they will compete in the Baja 500 with a new Subaru Crosstrek desert racer for the first time. Even though it doesn’t look like a Crosstrek it’s powered by a Subaru Boxer engine and the the platform comes from the Crosstrek crossover.

Dusty and Parker Grabowski, age 20 and 24 respectively, will be piloting Subaru’s newest off-road racer. The brothers are from Upland, California and have won multiple championships in short course racing. This will be their first attempt at the Baja 500 where Subaru is partnering with Crawford Performance as they take on the 49th running of the SCORE Baja 500 in Ensenada, BC Mexico.

Crosstrek has already won one race

The Subaru Boxer engine was built by designer and famed race car builder Quirt Crawford. Subaru’s Crosstrek desert racer is a Class 5 machine that will be put to the test in one of the most challenging motorsports events in North America. The team already put the Crosstrek to the test when they entered the McKenzie’s 250 race in Lucerne, CA, and won their class by over one hour.

Up until now, Subaru has been involved in stage rally and Global Rallycross racing with their Subaru WRX STI. Now the Subaru Crosstrek gets the first chance to take on the grueling Baja 500. Subaru Motorsports Marketing Manager Rob Weir says, “Putting this Crosstrek to the test in desert racing will once again show our fans the performance and durability of the Subaru BOXER engine. We’re excited to be involved with Grabowski Bros racing, and be entered in the Baja 500.”

It will be a busy weekend for Subaru Motorsports. They will also be running the Subaru WRX STI in Round 3 of the Red Bull Global Rallycross in Thompson, CT, and the WRX STI rallycar will compete in the Susquehannock Trail Performance Rally in Wellsboro, Pennsylvania.

LG's New EV Battery Plant Is a Welcome News for Tesla
Tesla Giga Berlin's New Hurdle: It's Not Only the Gov't, but Now Tesla Itself
END_OF_DOCUMENT_TOKEN_TO_BE_REPLACED