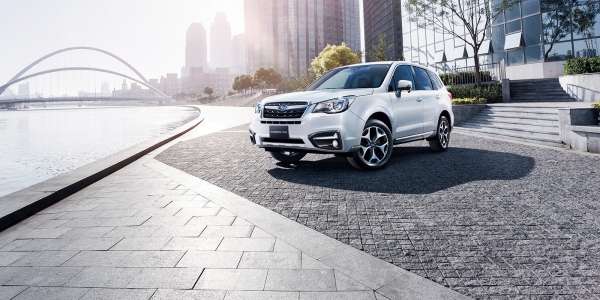 Subaru is rolling out three special models in Japan for the boxer engine’s 50th anniversary. A special Forester leads the way.
Advertisement

Subaru is proud of their boxer engine and they announced three special models to celebrate its 50th anniversary in Japan. The US, Australia and Europe won’t see these unique vehicles, they are for the Japan market only.

What makes the engine special?

Besides, Porsche, Subaru is the only automaker to use the boxer engine design, and the only manufacturer in the world to use it to power every vehicle in their lineup. Subaru’s signature Boxer engine was introduced on the Subaru 1000 compact passenger car on May 14, 1966. Since then, it’s been a productive workhorse for the brand, and its total production over the past 50 years now tops 16 million units. Subaru is celebrating with a unique Subaru Forester, Levorg sports tourer and their Crossover 7 SUV.

A unique 2017 Subaru Forester released today in Japan leads the trio. It gets a modern treatment inside that features ultra-suede seats, door trim with blue-green stitching to set it apart. The dash features a silver instrument panel trim, keyless access and push start, and 8-way power driver's and passenger seat and power rear gate.

Outside is where more special features can be seen. The Forester gets green tinted windows, additional chrome on the mirrors, side molding, side cladding and silver roof rails. A unique “S-Limited" model is available with 18-inch aluminum wheels and tires. This Forester will be equipped with Subaru’s advanced safer package and LED accessories.

A unique Subaru Levorg sports tourer will be released December 12. It comes with an advanced safety package, standard 17-Inch aluminum wheels and black colored door mirrors. In addition to the higher grade use LED head lamps, (black bezel), it also features a dark-plated grille. Levorg’s sporty appearance gets sportier with this model.

Subaru’s Japan-only Crossover 7 is their 3-Row, 7-passenger SUV. It was also released today (October 3). The interior gets a unique charcoal grey and tan color combination with an exclusive reversible cargo floor board. The exterior gets exclusive designed 17-Inch aluminum wheels.

Subaru is “Proud of Boxer” and they plaster it all over their motorsports vehicles in Japan. It's a unique engine that fits Subaru’s niche market of all-wheel-drive vehicles. Subaru celebrates 50 years of boxer with unique 2017 Subaru Forester, Levorg and Crossover 7 special models.