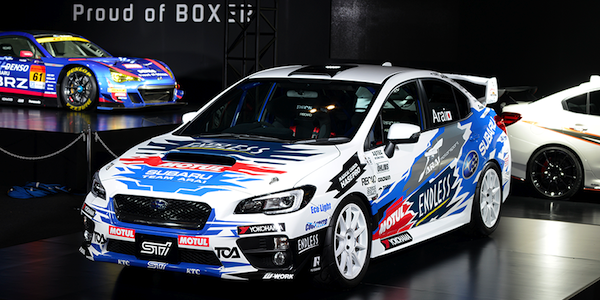 Toshihiro Arai will pilot the new 2015 Subaru WRX STI in the All Japan Rally Championship. This STI gets a very different power curve from the production model.
Advertisement

At the Tokyo Auto Salon, Subaru unveiled the new 2015 WRX STI All Japan Championship rally car. Subaru will participate again this year and will bring the new 2015 STI driven by Toshihiro Arai. The new 2015 Subaru WRX STI rally car is powered by the new high performance 2.0-liter turbo boxer engine that was perfected in motorsport by STI.

For the All Japan Championship series, Subaru Tecnica International has given the rally car significantly more torque and less horsepower than the stock engine. This is done to get the car moving through the course quickly at the lower speeds. Subaru has been perfecting the new 2.0-liter powerplant in the 2015 WRX STI Nurburgring 24-hour race car last year. The testing was done by the Subaru Tecnica International's (STI) race team. Rally racing requires a very different engine setup.

The new 2015 WRX STI 2.0-liter engine uses a combination of direct injection, high compression (10.6:1), Subaru Dual Active Valve Control System (D-AVCS), a twin-scroll turbocharger and an intercooler to get improved performance. The WRX STI NBR version uses different cams and higher-rate valve springs and other enhancements to enhance the performance envelope. The production 2015 WRX STI 2.0-liter gets a broader torque curve and peaks at 311 lb.-ft. at 4,400 rpm. The Rally car gets a much lower torque curve and peaks at 3,000 rpm for more low-end power.

Subaru has been involved in motorsports around the globe since the 1990s when they raced the 96 Gr-A GR8 4 door Impreza San Remo vehicle. The next vehicle was the WRC 1998 2 door GC8 Impreza model that was the forerunner of the WRX performance car. They have a long and storied history in Rally motorsports that continues today. What they learn from motorsports helps Subaru develop the technology for their performance production models.

Subaru Motorsport, directed by STI has an expanded race agenda with the 2015 WRX STI they run in the Nurburgring 24-hour endurance race, WRX STI in the WRC and ERC, and the all-new 2015 Subaru WRX STI in the Rally America and Global RallyCross series. This year they will also run the new 2015 STI rally car in the All Japan Championship series.