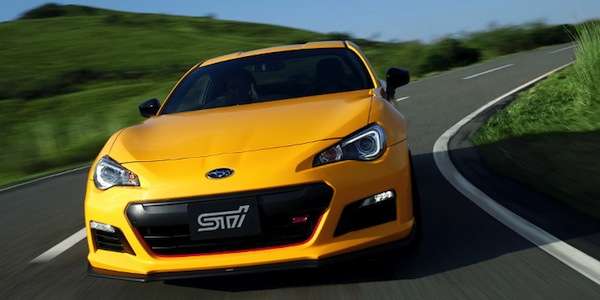 Subaru Tecnica International brings 2 examples of their tuning abilities to round 5 of the SUPER GT at Suzuka Circuit. A 2016 BRZ tS and the first Levorg STI.
Advertisement

The new 2016 BRZ tS that Subaru announced for the Japan market back in June will be on display for motorsport fans at round 5 of the SUPER GT at Suzuka Circuit this weekend. Subaru Tecnica International (STI) enhanced the BRZ’s chassis performance by using their expertise developed in its motorsport activities with the BRZ GT300 race car that will be racing this weekend. STI will also bring the first Levorg STI to the track to show what they can do to enhance the new sports tourer that’s sold in Japan, Europe and Australia.

Along with the BRZ tS and Levorg STI, Subaru will also bring their newest hybrid, the 2016 Subaru Impreza Sport Hybrid to the track. The new Hybrid will follow the XV Crosstrek Hybrid that was launched globally back in 2013 as a 2014 model. The Impreza hatchback hybrid will also feature a gasoline/electric hybrid powertrain. In the XV Crosstrek, the electric drive motor augments the 2.0-liter Boxer engine that generates 160hp and 163 lb. ft of torque. That’s an increase of 12hp and 18 lb. ft of torque over the standard XV 2.0-liter engine.

The 2016 Subaru Impreza Sport Hybrid will be arriving in Subaru showrooms in Japan this summer and the 2016 Subaru BRZ tS will be available later this fall. SUPER GT motorsport fans can see both along with the new Levorg sports tourer equipped with the STI performance package this weekend at the STI booth.