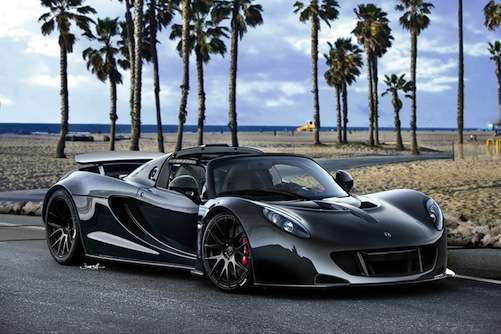 Steven Tyler's 2013 Hennessey Venom GT Spyder is close to being done and gets a test on the Hennessey dyno.
Advertisement

Tyler is well known for his love of fast motorcycles and now will be getting an even faster car to add to his motorcycle collection. Tyler launched Dirico Motorcycles in 2007 the bikes are designed by Steven Tyler and engineered by Mark Dirico, and built by AC Custom Motorcycles in Manchester New Hampshire.

Steven Tyler has been a long time motorcycle fan and riding enthusiast. Tyler said, “You get on one of these bikes and you can ride for days. These bikes are slick, rugged, and just damn cool. And they’re amazing to look at.” We can just imagine what Tyler will say when he gets behind the wheel of his new Hennessey Venom GT Spyder for the first time.

Even though we aren’t given the dyno numbers in the video, it looks like the car is ready to smoke the expensive rear tires. Steven Tyler’s $1.1 million Hennessey outfitted Hennessey Venom GT Spyder is built off a modified Lotus Elise/Exige chassis and powered by a General Motors 6.2 liter twin-tubocharged sequential Multi-Port Electronic Fuel InjectionV-8 engine that is also found in the Chevy Corvette ZR1.

Hennessey Performance says it has been tested up to 260 mph. The supercar will sprint from 0-60 mph in an incredible 2.5 seconds, and 0-200 in 15.3 seconds. That will be fast enough to keep Steven Tyler entertained for a long time. Tyler who is know as the “Demon of Screamin” due to his high screams and wide vocal range, may be screaming at the top of his 62 year-old lungs when he gets behind the wheel of his new Hennessey Venom GT Spyder with a mind-numbing amount of horsepower.

Steven Tyler’s 2013 Venom GT Spyder is reported to be ready for the American Idol finale on May 22 and 23rd, but don’t look for the supercar to be a part of the program.