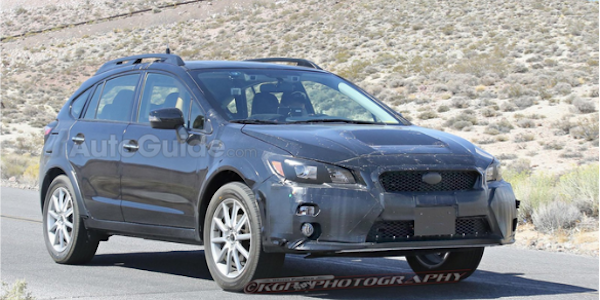 The 2018 Subaru XV Crosstrek is getting a new name and new architecture. What changes are coming to the crossover?
Advertisement

The new 2018 Subaru XV Crosstrek has been spied in California by Auto Guide and the Japanese automaker is in the early stages of testing this mule. Subaru is making changes to the crossover and it’s getting a new name and new architecture. According to a report by Automotive News, Subaru will drop the XV part of the crossover's name later this year when the car gets a minor freshening and it will be called Crosstrek in the U.S. The crossover gets the XV name in other global markets.

Other changes coming for the 2018 Subaru Crosstrek will be part of Subaru’s “Prominence 2020” vision that will include a new Subaru Global Platform. Subaru will introduce a new modularized platform that will support every model from the Impreza compact to the new Crosstrek crossover. It will make its debut in the next-generation Impreza in 2016.

Subaru will further strengthen the brand with new products while keeping an eye on quality. Subaru boss Yasuyuki Yoshinaga said, "We want to be a company that may not be big in size but has distinctive character and high-quality products. We will enhance the Subaru brand." Subaru will be introducing a new plug-in hybrid model that will be a current model in their lineup. Sources say it will be the Subaru Crosstrek.

Subaru will introduce the plug-in hybrid for their largest market, the U.S., to meet U.S. zero-emissions regulations taking effect in 2018. The new plug-in hybrid will likely be the Crosstrek and will be based on Toyota's hybrid technology. Toyota owns a16.48 percent stake in parent company Fuji Heavy Industries Ltd. (FHI).

The Subaru Crosstrek gas variant will also get direct injection soon. Subaru will be rolling out this next-generation boxer engine in the next few years. Subaru will also overhaul its powertrain technology, adding cylinder deactivation and lean combustion cycles by 2020, to meet more stringent emissions standards. Yoshinaga said Subaru wants engines “with thermal efficiency rates above 40 percent, which would top that of the engine in the Toyota Prius hybrid.”

The Crosstrek test mule front end also looks a lot like the newly remodeled WRX styling. The 2018 Subaru Crosstrek testing is in its early stages and it’s likely Subaru will introduce their new plug-in-hybrid technology in the popular Crosstrek crossover in late 2017 as a 2018 model. Stay tuned.

SZR wrote on September 8, 2015 - 6:25pm Permalink
Looks to be a possible hood-scoop on this Crosstrek with an attitude. Would be a great idea to put the WRX motor - or Forrester 2.0 Turbo in the Crosstrek. The lil' CUV has everything nailed - but the motor. 145hp just doesn't cut it these days.
danwat1234 wrote on January 17, 2016 - 4:53pm Permalink
Lean burn engine? Good luck with that and meeting CO/NOX emissions requirements. Honda gave up on lean burn engines in 2005 or so with the manual transmission 1st gen Insight being the last to have it. Toyota's 2016 Prius and Chevy 2016 Volt aren't lean burn either. I hope they can do that though, either with straight lean burn, or HCCI engine (part time sparkless ignition). Toyota's 2016 Prius engine meets 40% thermal efficiency. Right now, Subaru's engines are very loud on startup because it revs high to warm up the engine quickly. Also the AC compressor really booms. You can have the car cut back on the RPM by putting the CVT in drive to save fuel. This is with their 2015 cars at least.
Albertha wrote on December 10, 2018 - 4:24am Permalink
Hi would you mind letting me know which hosting company you're working with? I've loaded your blog in 3 different web browsers and I must say this blog loads a lot quicker then most. Can you suggest a good hosting provider at a reasonable price? Many thanks, I appreciate it!