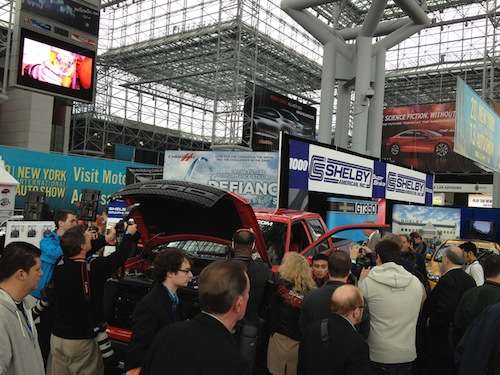 Shelby Raptor has phones ringing off the hook

Take a 2013 Ford SVT Raptor, add the Shelby goodies and you have the new 575 horsepower Shelby Raptor that has phones ringing off the hook at Shelby American offices.
Advertisement

When Shelby American unveiled the new Shelby Raptor at the New York International Auto Show this week, they knew immediately they had hit the bullseye. The crowds gathered around the Shelby-turned 2013 Ford SVT Raptor muscle truck that is like no other on the planet. Who wouldn’t want to see the 575 horsepower ultimate muscle truck? But what happened next is the most interesting part of this story. So what happened almost immediately after the large crowd saw the monster truck for the first unveiling?

According to John Luft, president of Shelby American, only minutes after the new Shelby Raptor was unveiled in New York, the phones began “ringing off the hook” at Shelby American offices in Las Vegas. Luft said, "Within a few minutes of its unveiling, the telephone began ringing off the hook for the new Shelby Raptor.” He went on to say, “Before we accepted a single order to meet the landslide of requests, we decided to expand the number of muscle trucks available per model year." Now that is a problem every automaker would like to have.

Shelby American initially was going to produce a limited number of Shelby Raptors. But Shelby executives have announced that due to the tremendous response to the new Shelby Raptor, the company has increased its initial production forecast. Shelby also produces the legendary Cobra sports car, along with the GTS, GT350, Super Snake and Shelby 1000 based on the current Ford Mustang and Ford Shelby GT500 vehicles.

The new Shelby Raptor is built for the ultimate in performance and is definitely deserving of the Shelby name. “Aerodynamically speaking, the Raptor was engineered for maximum performance,” said Gary Patterson, vice president of operations. “We spent our efforts improving the power, cooling and handling systems because every Shelby is built to excel under even the most extreme conditions.”

Shelby takes a stock 2013 Ford SVT Raptor that is impressive already, and adds a 2.9 liter supercharger, massive inner cooler and new exhaust system. The results are impressive and the muscle truck pumps out 575 horsepower and is coupled with a six-speed automatic that transfers all that power to all four wheels. A leather interior and special graphics are part of the standard package.

A host of options will be available including 35-inch All-Terrain tires and custom wheels, suspension packages and three graphics choices for the custom truck. But the Shelby Raptor package doesn’t come cheap. The post-title package starts at $17,995, not including the base Raptor. The company says every Shelby Raptor will be numbered and documented with a Shelby CSM number and entered into the official Shelby Registry.

The new Shelby Raptor is already a huge success for the company that is named after the legend Carroll Shelby. It looks like they now have a successful truck to add to their stable of performance vehicles. If you can get through to the company phones at Shelby American, interested buyers can reserve a Shelby Raptor by calling the sales team at (702) 942-7325 or visit www.shelbyamerican.com