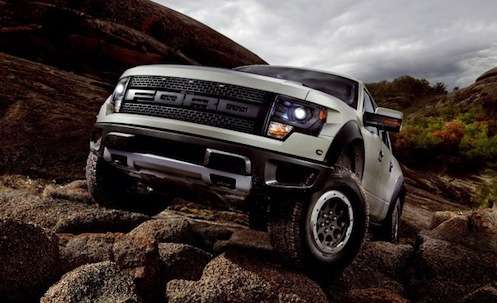 Ford has announced details on the new 2013 F-150 SVT Raptor that will give it even more off-road performance. Details on how to win a free 2013 SVT Raptor are here.
Advertisement

Off-Road enthusiasts will get even more levels of performance as Ford introduces the 2013 SVT Raptor with more levels of rock-crawling capability. Sales of the 2012 SVT Raptor are up 20 percent breaking last year’s record, and with the 2013 model getting updates, things are looking even more impressive for the factory truck. Since being launched in 2010, the Ford F-150 SVT Raptor has been impressive for its high-speed off-road performance.

Ford has announced the addition of some key features like high-intensity discharge HID headlamps that are brighter and whiter than standard lamps. The new 2013 SVT Raptor will also get an industry-first factory forged-aluminum conventional wheels that can be ordered with extra-capable beadlocks. These new beadlock wheels secure the edges of a tire to the wheel between two surfaces so the tire is unlikely to roll off the rim if it’s aired down to very low pressure, providing extra grip for crawling over large rocks.

“Raptor’s exclusive beadlock wheels give the customer the best of both on- and off-road worlds,” said Adam Wirth, SVT chassis engineer. “Tire inflation can be dropped to a very low threshold for maximum traction under extreme conditions, yet holds tight – and stays tight – when returning to the road.”

The 2013 off-road SVT Raptor is available exclusively with a 6.2-liter V8 engine, producing 411 horsepower and 434 lb.-ft. of torque. The V8 is mated to an electronic six-speed automatic transmission with tow/haul mode and SelectShift Automatic functionality. The 4WD system features electronic shift-on-the-fly capability for the transfer case. The front axle features the Torsen differential with 4.10 to 1 gearing. The rear axle is also 4.10 to 1, with an electronic-locking differential.

Ford Parts has launched its “Trap the Raptor” sweepstakes, where the parts division will be giving away one grand prize of a brand new 2013 Ford F-150 SVT Raptor. The sweepstakes is interactive and has multiple ways to enter each day. Contestants can play the game every day and guess what the missing part is in the illustration.

You’re limited to one entry per day just for playing, but you’ll get an additional entry per day if you guess the missing part. A weekly prize of  1:24 scale die-cast model of a Ford F-150 SVT Raptor will also be given away until the contest ends. The sweepstakes is already live, and will end on November 18, 2012. Click here to go to the Raptor sweepstakes site.

The 2013 Ford F-150 SVT Raptor is a factory high-performance off-road truck that has even more true rock-crawling capability. And you have a chance to win one free.

For those wanting pure luxury, check out the all-new 2013 Ford F-150 Limited.