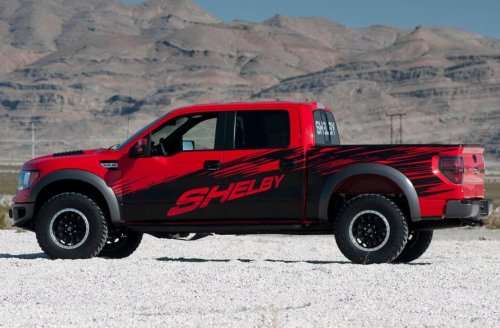 The Shelby Raptor F150 is 575 horsepower of offroad awesomeness

The new Shelby Raptor F150 is based on the Ford SVT Raptor F150 and that includes the 6.2L SVT engineered V8 but where the standard Raptor offers “only” 411 horsepower, the Shelby Raptor packs 575 horsepower. This big jump in power is achieved by Shelby adding a 2.9L Shelby supercharger package helping stuff more air and fuel into the engine while a Shelby Borla exhaust system helps to move out the spent exhaust. This power is channeled to all four wheels via a 6-speed automatic transmission and an electronic four wheel drive system.

Helping to get traction on road and off, the Shelby Raptor includes a unique set of Shelby wheels wrapped in 35-inch Goodrich All-Terrain tires. The exterior package is wrapped up with the buyer’s choice of three different graphics packages sporting the Shelby name along the side. On the inside, the Shelby Raptor features unique seating surfaces with bright red leather and uniquely numbered Shelby badging.

"As a native Texan, Carroll Shelby loved powerful trucks," said John Luft, president of Shelby American. "Carroll connected his love for trucks with his passion for performance on several projects, with the first one over 30 years ago. The latest Shelby truck was created to conquer any terrain with serious velocity."

Only 100 examples of the Shelby Raptor will be built this year and like the Shelby Mustang and Focus ST models, the Raptor F150 will be numbers and included the Shelby vehicle registry. This post title package carries a starting price of $17,995 and that does not include the base price of the Raptor needed to build the Shelby package. The least expensive 2013 Raptor carries an MSRP including destination of $44,625 so when you add in the cost of the Shelby package, this supercharged offroad supertruck will set you back roughly $62,620. If you are in the market for a new $62k, 55 horsepower truck that will go anywhere in a big hurry, Shelby is currently taking orders for their new Raptor package right now. For more information visit the Shelby website at www.shelbyamerican.com.

When Carroll Shelby passed away last year, many wondered if the loss of their leader would mean the end of the Shelby American high performance vehicle lineup. Quite the contrary, Shelby has not only continued to pump out high performance Mustangs but the company has also expanded their operations to include the new Shelby Focus ST and the Shelby Raptor.

"The Shelby American line up now has something for everybody," added Luft. "We continue to offer the legendary Cobra sports car, along with our GTS, GT350, Super Snake and Shelby 1000 based on the current Ford Mustang and Ford Shelby GT500 vehicles. We took a page out of our history by bringing back Carroll's beloved front wheel drive 'pocket rocket' with the Shelby Focus ST. Since Shelby American's first official appearance was at the New York Auto Show over 50 years ago, it's fitting that our 'biggest and baddest' product unveil of the year, the Shelby Raptor truck, would occur in Manhattan."

This isnt the first time that the Shelby name has appeared on a high performance pickup, with the new Raptor following in the footsteps of the Shelby Dakota from back in 1989. That sporty Dodge pickup packed a specially prepared 5.2L V8 with a whopping 175 horsepower making it one of the fastest trucks of the day. This new Shelby Raptor takes a very different approach than the old Dakota but like that smaller truck back in 1989, the 2013 Shelby Raptor is one of the fastest trucks available today.