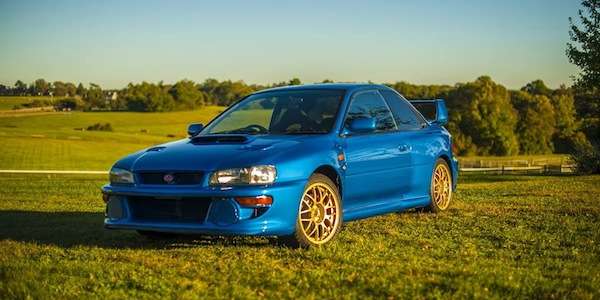 The all-new 2015 Subaru WRX STI Launch Edition will be on display at Subaru Boxerfest in Maryland this weekend with original 1998 Subaru 22B-STI.
Advertisement

Today, thousands of Subaru fans will gather in the Washington D.C. area for The Mid-Atlantic’s All-Subaru Shootout and Showoff. Fans will bring their Subarus to FedExField for an all-Subaru Autocross and all-Subaru Car Show. Subaru will bring their all-new exclusive 2015 Subaru WRX STI Launch Edition and the ultra-rare 1998 Subaru 22B-STI for fans to look at.

Fans can test their driving skills in the Boxerfest Autocross to see who has the best time negotiating the “Subaru-in-mind” designed course. One driver at a time negotiates a course laid out with the cones, or pylons, testing their skill against the clock. Time penalties are charged for disturbing cones. Fans can display their Subaru at the All-Subaru Car Show that takes place in a prime location of Boxerfest. Entering the car show guarantees them one of the best spots to show off their car at Boxerfest.

One of the big draws will be the 1998 Subaru 22B-STI that Subaru will display at the show today. This was the Halo STI that started it all for the Subaru Impreza. It was built for Subaru's celebration of their 40th Anniversary as well as the third consecutive manufacturers' title for Subaru in the FIA World Rally Championship (WRC).

This Subaru Impreza 22B STI is one of the rarest and most sought after Subarus of all-time. Only 424 of these vehicles were ever produced and we don’t know exactly how many are still around. They were snapped up by enthusiasts in just 24 hours. Subaru transferred the technology from the rally cars in 1998 to this first STI street version.

The vehicle was only sold online for a limited time and sold only for the Japan market. There are only two of these super-rare cars that have been shipped to the U.S. This was the first Impreza model to get the flared fenders and an adjustable STI wing on the rear deck.

Alongside the 22B-STI, Subaru will be displaying the all-new 2015 WRX STI Launch Edition. It’s painted a WR Blue Pearl and sports gold wheels like the 22B-STI. This will be a very special car that will be ultra-exclusive for true loyalists. The new 2015 WRX STI Launch Edition will be only offered for a limited time with only 1,000 examples making it to the U.S. market. The WR Blue Pearl WRX STI performance car pays tribute to its racing heritage that helped develop the car into what it is today.

If you live in the Washington D.C. area, head over to FedExField for The Mid-Atlantic’s All-Subaru Shootout and Showoff. The Subaru Boxers will rumble and don’t miss the ultra-rare 1998 Subaru 22B-STI and exclusive 2015 Subaru WRX STI Launch Edition that will be there.