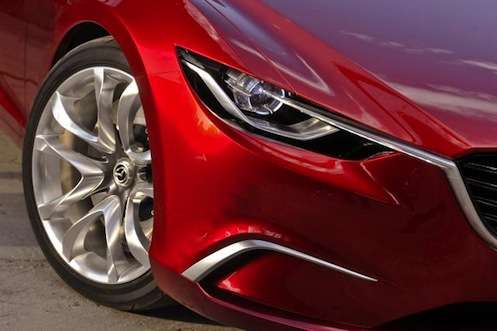 Mazda has released the second Mazda Mazda6 teaser video that shows even more of the all-new redesigned sedan.
Advertisement

Mazda has released a second video giving us a hint at what the next generation Mazda6 will look like showing the front fender line. The all-new redesigned car is set to be officially unveiled before the world at the 2012 Paris Auto Show. Mazda just released the first teaser video yesterday and revealed the front end of the car and its headlight. The 2014 Mazda6 looks surprisingly similar to the TAKERI Concept car pictured here.

This week Mazda is releasing short clips of the all-new mid-size sedan that will continue throughout the month with a series of short 20 second spots to wet our appetite. Each new video will focus on different angles and features of the new Mazda6. The final video will be released later in the month and will capture the first four initial spots and will give us the final teaser.

The TAKERI Concept made its North American debut the New York International Auto Show in early April. While Mazda doesn’t say that the new Mazda6 is a production version of the show car, this second video gives us a glimpse down the side of the car and it looks like it comes directly from the TAKERI Concept. Mazda says the newly designed Mazda6 uses expressive lines that “embody the KODO Soul of Motion design language.”

SkyActiv will motivate the 2014 Mazda6

The 2014 Mazda Mazda6 will be powered by the fuel-efficient SkyActiv technology in the 2.0-liter four-cylinder engine. It’s the same engine that motivates the 2013 CX-5 and was the first Mazda vehicle to get the new fuel-sipping technology. If the engine remains the same, it will develop 155 horsepower and 150 lb-ft of torque. While a V6 option has been rumored, it’s unlikely because of the tremendous success that Mazda is having with the 2.0-liter engine. But we could possibly see a new diesel powerplant in the Mazda6 with 165 horsepower and 300 lb-ft of torque.

The new freshly designed Mazda6 sedan will also come with the full suite of SkyActiv technologies, with the new engines, transmissions, body and chassis components. The 2.0-liter four will feature direct-injection and the highest compression ratio in any mass-produced gasoline engine in the world. Because of the ultra-high compression, Mazda engineers overcame the problem of premature combustion, commonly called “knocking.”

This second video reveals the prominent front fender and sculpted hood creases of the new 2014 Mazda6. Mazda chief designer Akira Tamatani characterizes this view as "Well-toned, lean muscles that firmly hug the road" The all-new 2014 Mazda6 is expected to go on sale in early 2013.

Take a look at both the first and second teaser video’s below of the 2014 Mazda Mazda6.