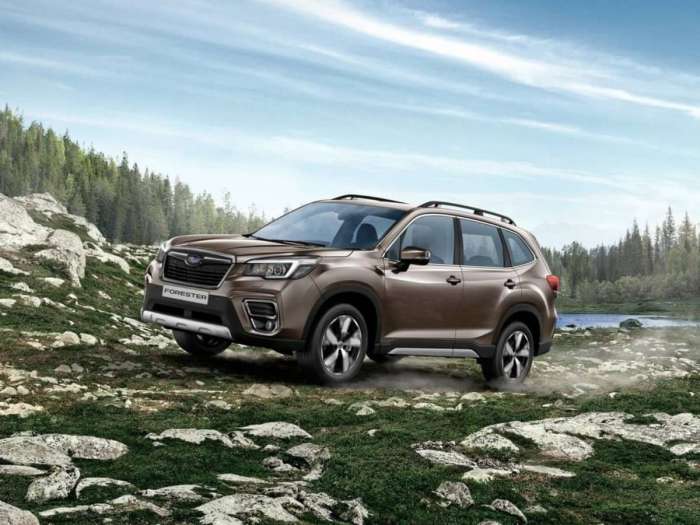 Russia Gets Two Engines In New Forester; What Is Subaru Thinking?

The Russian market will get two engines in the all-new 2019 Subaru Forester. See what engines it gets and why it doesn’t make sense.
Advertisement

The all-new 2019 Subaru Forester is the brand’s number-one selling vehicle around the globe and launches in Japan, the U.S., and Australia with just one gasoline engine, the new direct injection 2.5-liter Boxer. The new fifth-generation Forester SUV has been announced in Russia and it’s coming with two engines. In addition to the newly-revamped 2.5-liter gasoline boxer, Russian customers also get a 2.0-liter Boxer engine in the newly-remodeled Forester SUV.

Performance fans don’t have to be upset, this isn’t a 2.0-liter turbocharged engine sourced from the Forester 2.0XT model that’s been discounted. It’s the same 2.0-liter naturally aspirated power plant in the Crosstrek with 152hp. This engine has also received the newest engine upgrades with direct injection, and 80 percent of its parts are new.

Both Russian 2.5-liter and 2.0-liter Boxer models will be mated with the Lineartronic CVT automatic transmission sending power to all four wheels. Subaru discontinued the 6-speed manual gearbox in all global markets.
Subaru Corp gave the CVT a complete overhaul by expanding the gear ratio range and reducing the overall weight to improve dynamics and reduce fuel consumption.

André wrote on September 19, 2018 - 8:55am Permalink
Whats going on with Subaru ? They were performance cars , fun and funky , thats what made them different , now I can rather buy any other normal car , PLEASE SUBARU , PLEASE keep you identity and performance ???? PLEASE ???
Ed B wrote on September 19, 2018 - 10:04am Permalink
Andre' - Sorry, not in the cards. I totally agree with you. However, Subaru's sights are squarely set on the masses. Gone are the days of fun, funky and performance. The one size engine fits all approach stinks, but we can see the writing on the wall. I really hope they at least offer the new turbo engine used in the Ascent for the 2020 Outback and Legacy, but I won't hold my breathe.
Jace wrote on September 19, 2018 - 10:59am Permalink
Tax reasons perhaps? Some countries tax vehicles based on engine displacement.
Digital Doc wrote on September 19, 2018 - 12:15pm Permalink
The 'optional engine' in the new Subaru has been found! Seems like they have gotten pretty good at shooting themsleves in the foot these days. Only reason might be cost, but hard to imagine this would save anything significant. Hey, at least we know now that the 2.0L fits (as Subaru would have given us some ridiculous story about how the new engine bay was only 'optimized' for the 2.5L mill only), and now we just need to add back the turbocharger to get the car they should have built in the first place.
Michael wrote on September 19, 2018 - 12:51pm Permalink
They only sell the 2L Forester in Japan and most Asian countries, higher capacity cars have higher taxes. The 2.5L was only created when it became very popular in the US. Also other car makers do this like how VW sells big engined cars only in the US whereas the rest of the world gets turbo low capacity engines. They do this because fuel is very cheap in the US and people look down on small capacity engines there.
Dennis wrote on September 19, 2018 - 4:58pm Permalink
Russia has a progressive tax on horsepower. Each additional horse is an additional expense. Plus, above 175hp you get into a higher tax bracket.
Eric wrote on September 19, 2018 - 6:40pm Permalink
Big cars must have a big engine. Not a small 1.0 turbo or 1.2 turbo like cars from Germany or France.
Dean wrote on February 20, 2019 - 8:50am Permalink
Maybe they are offering naturally aspirated engines for those who fear the problems associated with direct injection engines like oil dilution with gas as well known in the Honda crv 1.5 liter turbo engine.