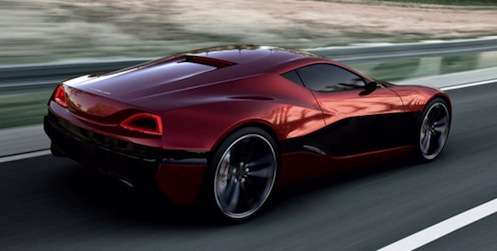 Rimac Concept One tears up the track [Video]

Rimac Automovili gave us details of the Rimac Concept One last week, and now they’ve released a video of the supercar in action.
Advertisement

The Rimac Concept One is proof that electric vehicles can be green and environmentally friendly, but don’t have to be boring and unexciting. Rimac Automovili has released a video of their battery-powered supercar at the track in action showing just how much fun electric cars can be.

With a sticker price of $980,000 and only 88 cars planned for production, it may not be the most practical car for electric car enthusiasts. But the upstart company from Croatia is showing that the future can even be bright for performance car enthusiasts who haven’t embraced the new technology. And this concept car can match most supercars in terms of performance and luxury.

The Rimac Concept One features four electric motors that develop a combined power output of 1088 horsepower and an incredible 2802 lb-ft of torque. With the car only weighing 3638 pounds, the Concept One has a top speed of 190 mph and a 0-60 mph time of just 2.8 seconds. Some have asked why the supercar is only capable of 190 mph. When Mate was asked the question, he had a simple answer; because the car is electronically limited,“It can go 500km/h, but we can’t guarantee the passenger’s safety.”

The Rimac Concept One is powered by a 92kWh liquid-cooled battery and each of the car’s four electric motors can be driven independently and rely on sophisticated software to control them. The car has a driving range of approximately 373 miles on a single charge.

When owner Mate Rimac took his BMW 323i E30 and made his first electric car, it was the first step in chasing his dream of becoming a supercar manufacturer. He put his ideas on paper and the Concept One is the result of Mate’s vision to build his very own supercar. Now, Rimac is developing high performance electric car technology including drivetrains and battery systems for sale to other firms.

Mate promises a lot of safety technology will be put inside the powerful car. Since the car has four independent motors on each wheel, the car accelerates incredibly fast. The advanced options on the Concept One can manage its stability control a lot faster, and with the front and rear axles not being connected, it is possible to manage each wheel at the same time.

Fans who have been excited to see what the Rimac Concept One can do on the track, don’t have to wait any longer. The newly released video shows that the Concept One can easily smoke the Vredestein Ultract Vorti high performance tires.

Tesla Giga Berlin's New Hurdle: It's Not Only the Gov't, but Now Tesla Itself
Teslas Are Sold Out Until 2023, But The Timing May Reverse
END_OF_DOCUMENT_TOKEN_TO_BE_REPLACED