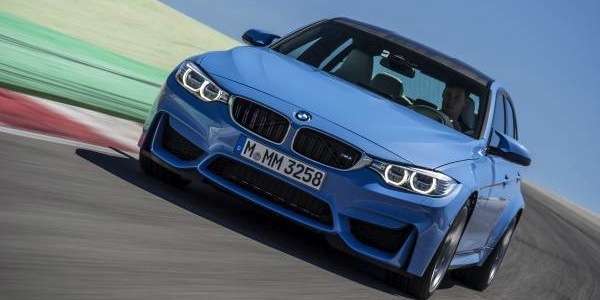 The new 2015 BMW M4 gets a redesign with the 3.0-liter in-line six-cylinder engine. Was it a major risk to drop the V8?
Advertisement

The redesigned 2015 BMW M4 gets a top grade from Cars.com and wins Best New Luxury Sport Coupe of 2015. Was it a major risk to drop the V8 from the new M4? Cars.com is one of the biggest online resources for buying and selling new and used cars. The editors were impressed with the new 2015 BMW M4 and said BMW took major risks when they redesigned new M4. Formerly the M3 coupe, the new M4 gets a new inline six-cylinder engine that replaces the V8 powerplant that was introduced in the 4th generation performance car. But was it really a major risk by BMW M to do it?

The redesigned BMW M4 gets top grades from Cars.com and is the “Best New Luxury Sport Coupe of 2015.” The editors at Cars.com says, “BMW took major risks in redesigning its M4 by replacing a V-8 with a twin-turbocharged inline-six-cylinder. As consumers have learned from other vehicles that have made similar changes, the bottom line is what really matters.”

The V8 is still used today in the Z4 race car

In 2007, BMW introduced the first V8 powerplant in the E90 M3 and it was a huge success, and that 4.4-liter engine went into the Z4 race car that’s still racing today. The second generation E36 came with the high-revving 3.0-liter in-line 6-cylinder that was used until 2006. So did BMW really take major risks by going back to the 3.0-liter in-line six?

BMW goes back to its roots

BMW knew it wouldn’t be an issue with M3 enthusiasts because the 3.0-liter powerplant is a proven engine from the brands performance M division. The new M4's twin-turbocharged inline-six-cylinder offers higher horsepower and more torque at a lower rpm, yet gets improved fuel economy and a favorable front/rear weight distribution. BMW went back in time and developed the new M4 with the high-revving six and still kept the original M3 philosophy.

The new 2015 BMW M4 has received a reduction in weight, added rigidity, a high-revving engine, a great drivetrain and new steering. Cars.com says, “Just as the 3 Series and 4 Series remain the luxury sport sedan and coupe to beat, the M3 and M4 remain the ultimate-performance variants to beat, even as new competitors enter the game.”

BMW didn’t really take major risks in dropping the V8 from the new 2015 M4 and going with the in-line six-cylinder powerplant. It takes the performance car to the next-level of performance while achieving better fuel efficiency. M4 is still the top performance car in the world even with the 3.0-liter M TwinPower turbo.