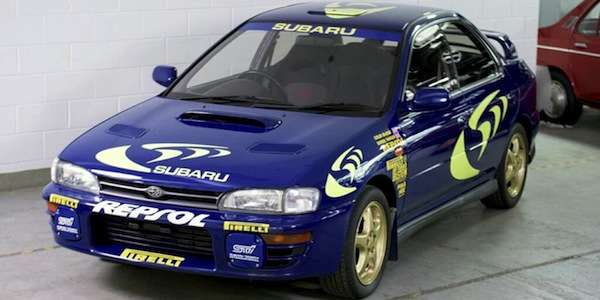 A surprise announcement by SRT USA reveals a must-see for Subaru performance enthusiasts. What is Subaru bringing to LA GRC?
Advertisement

Subaru Technica International is sponsoring the Red Bull Global Rallycross in LA on September 12-13 and rolling out some very special cars at the motorsports event. Subaru performance enthusiasts won’t want to miss the eleven iconic WRC championship cars, Subaru WRX STIs and BRZs that will be on display. Subaru motorsports says it is the largest collection of Subaru performance heritage vehicles known to be on display in the U.S.

What vintage cars will be on display in LA?

STI will bring the 1999 WRC99 built by Prodrive for Richard Burns who drove the car winning the 2001 WRC driver’s title. He owned the car for two years before passing away after a battle with brain cancer. The car now resides at the Dirtfish Rally School Museum. A 1996 WRX STI Type RA producing 270hp will be on display. The WRX STI was originally used for auto shows and built to honor the legendary Colin McRae.

A very rare 1999 Subaru 22B will be on hand in LA and was produced to commemorate Subaru’s 40th Anniversary as well as the third consecutive manufacturer’s title for the brand in the WRC. It’s 1 of only 2 in North America. A 1996 Impreza WRX STI Type RA 555 Rally car used to promote the launch of the 2.5RS Coupe in 1998 will be rolled out. A 2004 Subaru WRX STI, based on the Impreza, will be in LA and the iconic WR Rally Blue STI was the first iteration imported to the U.S.

Fans will also get to see the 2006 WRX STI that brought Travis Pastrana two Rally America Championships in 2006-2007. The performance sedan also won X Games beating teammates Colin McRae and Ken Block. A limited edition 2012 WRX STI S206 NBR Challenge model will be there and was built to commemorate the class win at 24hr Nurburgring race. It produced 315hp with torque of 318lb ft.

Other Subaru motorsport and limited edition vehicles on hand in LA will be the 2015 WRX STI piloted by Mark Higgins that set a new lap record on the 37-mile Isle of Man TT road course last year. Others include the 2008 Dirtfish Rally School STI, 2013 Dirtfish Rally School BRZ, 2015 STI GRC car, 2015 STI Rally America car and the 2016 Series.HyperBlue WRX STI and BRZ.

If you are headed to LA, you won’t want to miss this display of iconic Subaru vehicles at Red Bull Global Rallycross. Subaru Motorsports Marketing Manager Rob Weir says, “It will be hard to top a collection of this pedigree, so it’s a must-see for any performance enthusiast.”