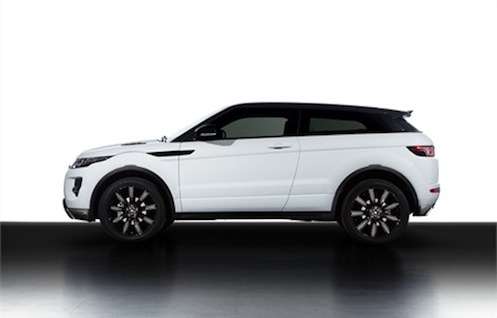 Range Rover Evoque appeals to an even bigger audience

Land Rover is rolling out a new 2013 Range Rover Evoque that will broaden its appeal with the stunning new Black Design Pack.
Advertisement

Land Rover is bringing out another Special Edition Range Rover Evoque that will increase buyer appeal. The new 2013 Range Rover Evoque Black Design Pack will make its world debut at the Land Rover stand at the 2013 Geneva Auto Show. The new Evoque is sold globally in over 160 countries and has been wildly popular with crossover buyers. Now it gets another special treatment to appeal to a new global generation of buyers that will be available starting in April 2013.

The new Evoque crossover already looks different than anything else on the road. But the new Black Design Pack, available exclusively on Range Rover Evoque 'Dynamic, will be featured with a Fuji White exterior and gets a number of striking black design cues to further set it apart from the crowd. The Black Design Pack made its debut earlier this year on the Sicilian Yellow Special Edition Evoque.

Buyers already have an almost unlimited number of choices to customize their Evoque across the Pure, Prestige and Dynamic models. The Black Design Pack gives yet another choice and starts on the outside and will feature 20-inch, darkened front headlamps and fog lamps with clear rear lamps, Black 'Range Rover' lettering front and rear, a rear sport spoiler, dark exhaust finishers and 9-spoke gloss black forged wheels that have never been offered on Evoque before now.

All exterior bright finishes have been removed on the new Evoque Black Design Pack to create the unique effect. Dark exhaust finishers painted in Santorini Black are complemented by a gloss black rear bumper and inner and outer sump guard. The effect continues up front with the darkened front headlights and fog lamps and the rear lamps have been modified to give a clear effect so that they do not visually appear permanently red. Range Rover lettering across the hood and tailgate finish out the new black look on the exterior.

The unique treatments continue on the inside with the new Evoque with Black Design Pack getting interior finishes that include contrasting stitching on seats, central storage area, door trims and fascia mid-section. Land Rover understands they need to continually add new features to the Evoque and they can’t rely on past successes to keep the new crossover selling well. The new Limited Editions and Black Design Packs are designed to give the Evoque a fresh appeal to its global buyers.

The new Range Rover Evoque continues to be Land Rovers most popular model selling in excess of 100,000 vehicles in its first full year of sales and has already received 124 global awards. And buyers around the globe keep adding to that number as the new crossover continues to show rapid growth worldwide.

Evoque appeals to a bigger audience

John Edwards, Land Rover Global Brand Director says, “The Range Rover Evoque has proved itself as our most desirable product and continues to show rapid growth worldwide. Offering our customers even greater choice with the option of the striking Black Design Pack can only make the Evoque appeal to an even bigger audience. With its dynamic and sporty handling, formidable all-terrain performance, choice of premium luxury interiors and color and feature combinations, customers truly can personalize their Evoque to suit their personality," added Edwards.

Customers can already choose from a broad selection of Range Rover accessories. The accessory range includes exterior and interior features, along with a comprehensive choice of practical loading and towing items. Look for the new Black Design Pack to be unveiled in Geneva and will be available on the bold and sporty 2013 Range Rover Evoque Dynamic model. Customers can begin placing their orders in April.