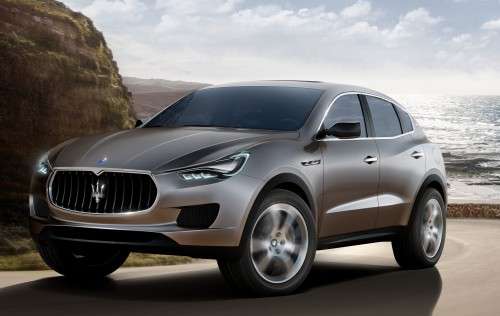 The Maserati Kubang concept will make its last appearance in Beijing, and sources say it will appear at the 2014 Detroit Auto Show in production form.
Advertisement

When the Maserati Kubang concept SUV made its U.S. debut in Detroit earlier this year, it created quite a stir. Imagine a Detroit-built Jeep Grand Cherokee platform underneath and a Maserati body with a Ferrari-based engine under the hood. You can see why the Kubang will be getting even more attention as the sporty SUV is reported to be going to production soon.

Automotive News Europe says, the concept will be making its final appearance in Beijing before it is officially retired. Maserati sources say the next time we see the Kabang, it will be at the 2014 Detroit Auto Show and it will be the production version and it will be getting a new name. "After Beijing, we will retire the Kubang concept. Our SUV will reappear in its production form and with its final name in due time," Maserati CEO Harald Wester told Automotive News Europe on the sidelines at the Beijing show.

The worldwide luxury SUV market is one of the fastest growing segments in the industry and Maserati is taking a good look at the success of the Porsche Cayenne, the Range Rover Evoque, and they are wanting to keep pace with competition such as Lamborghini with its Urus and Bentley with the EXP 9 F.

Reports say the luxury-sport crossover from Maserati will be assembled on the same line as the Jeep Grand Cherokee at Chrysler's Jefferson North plant in Detroit where it will get its all-wheel-drive underpinnings. But the new production crossover will be getting the heart of a race car.

At this years show in Detroit, Fiat boss Sergio Marchionne said the production version that's due in 2014 will be "pure Maserati." We think he was talking about the 500 horsepower twin-tubo 4.0-liter Maserati V-8 engine that will power the luxury crossover. So don’t look for a Chrysler Hemi in this Maserati. "If it doesn't have a Ferrari block, it isn't a Maserati," Marchionne insisted at the Detroit show. "I could have used a supercharged Hemi, but then it wouldn't have been an authentic Maserati."

The production model will get some other performance-minded donors. Mercedes-Benz will co-developed the architecture that underpins the Jeep Grand Cherokee with its own M-Class suspension. And if that isn’t enough of a reason to get excited, Maserati has brought in Paolo Martinelli, who formerly headed engine development for Ferrari's Formula 1 team, to head the powertrain development.

It will be a long wait until January 2014. Watch for the new Maserati SUV with its new name to premiere at the Detroit Auto Show in 2014.

Callpills Pharma Inc wrote on April 25, 2012 - 6:13am Permalink
Nice site, I have bookmarked your site yet and I will come back again! You have a greatest site!