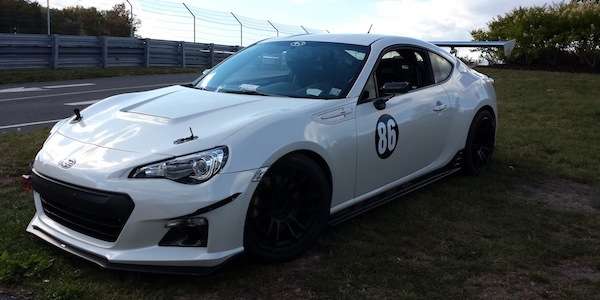 Toyota has been testing a new “hard-core” 2015 GT86 Limited Edition GRMN 86 in Japan and it could be ready for sale by mid 2015.
Advertisement

Toyota’s motorsport division was seen testing a new 2015 GT86 Limited Edition GRMN 86 street/track sports coupe in Japan that will hit the market next year. The highly-camouflaged GT86 was photographed my Motoring.au and it’s a “road-going version of a race-spec Toyota 86. The track-focused sports coupe comes on the heels of the concept 86 coupe that was unveiled at the Tokyo Auto Salon 2014 earlier this year. The car was created by Toyota’s motorsport division, Gazoo Racing Meister of Nurburgring (GRMN).

Motoring caught chief engineer Tetsuya Tada and former Japanese GT driver Masami Kageyama and several senior engineers at Fuji Speedway in late November throwing the new GRMN 86 around the race track. This GT86 was directly inspired by a Nurburgring 24-hour class-winning race car and won’t come cheap. Motoring.au says the sports coupe will cost double the price of a standard GT86. Toyota has not said how many of the limited edition coupes will be produced.

Modified for the road and track

The GRMN 86 will come modified with a mix of aluminum and carbon-fiber body parts like bespoke front and rear spoilers to reduce curb weight, hood air vents for better cooling, stiffer suspension, drilled brake rotors with six-piston calipers, and sticky 17-inch Bridgestone Potenza RE 71/R tires. Inside, the new 2015 GRMN 86 comes with a wrapped sport steering wheel, gear knob and hand brake as well as special racing seats with additional side support and four-point harnesses.

No turbo for the Limited-Edition GRMN 86

The 2.0-liter Subaru boxer engine also gets a few upgrades but stays naturally aspirated. A source close to Toyota told Motoring.au that exhaust and ECU revisions have added around 20kW (28hp), taking the GRMN86’s power up to 170kW (228 hp).

After a few hot laps around the track test driver Kageyama was asked for a quick evaluation of the limited-edition GRMN 86. He said, “The car handles just like a Nurburgring 24-hour spec machine. It turns in well with loads of steering feel and lets the driver know early what’s happening at the rear-end, which makes correction very readable and progressive.”

Masami Kageyama was able to get a feel for the car’s needs as he threw it around Fuji Speedway and says the coupe needs further development before it’s ready for production. He went on to say, "It’s quick and very stable in high-speed corners and under heavy braking. I’d say the car’s at around 80 per cent now. We still have a little more work to do on rigidity and ride quality before it’s ready for the road.”

The new 2015 Toyota GT86 Limited Edition GRMN 86 will be exclusive and won’t come cheap for the markets where the GT86 is sold. The new GT86 street/track car will launch in global markets mid 2015.