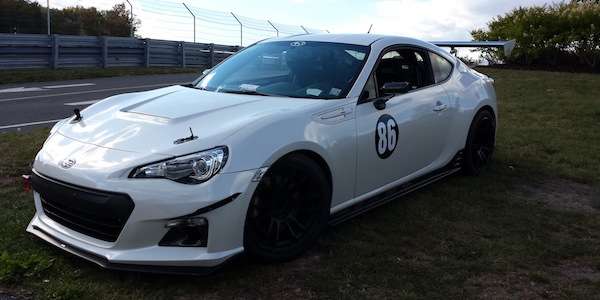 A 14R-60 GT86 limited edition coupe launches in Japan as Toyota's wildest 86 yet. Why does this track-ready model point to a future Subaru BRZ STI?
Advertisement

The 2015 Subaru BRZ launched without a turbocharged model, but Toyota and Subaru brought a track-ready BRZ/GT86 coupe to an event here in the U.S. that points to an exciting future. Toyota just launched this race-ready model in Japan. It’s the wildest official version of the sports coupe yet and it could point to a BRZ STI that is coming in the future. The two Japanese automakers partnered together to bring the race-ready 14R-60 BRZ/GT86 coupe as you can see the BRZ badge on the front and 86 decal on the door. We know more from Australia’s Motoring.com.au about the performance model that just launched in Japan.

This limited edition coupe was developed by Toyota Racing Development (TRD) and its motorsport subsidiary Gazoo Racing for the Japan market only. They named the Japan model the 14R-60 coupe and it comes with the most extensive performance upgrades yet produced by Toyota. It comes with a number of performance upgrades on the outside and inside that makes it a formidable track-ready model.

New performance upgrades on the 14R-60 coupe include a carbon-fiber roof and a race-ready interior featuring one-piece front bucket seats with four-point harnesses and an orange Alcantara-trimmed steering wheel and gear shift. The rear seats and sound system have been removed to lighten up the coupe, but the AC remains intact.

Performance upgrades underneath and outside

14R-60 gets extensive chassis upgrades that include height-adjustable coil-over suspension with new bushings, links and arms, and stiffer engine mounts and additional body bracing have been added to the limited edition model. It also gets bigger TRD brakes with four-piston calipers gripping two-piece 345mm front rotors and 330mm rear discs with two-pot calipers. They can be seen poking through the forged lightweight 18-inch magnesium wheels that are wrapped in 235/18 R performance Bridgestone tires developed specifically for this car.

But here’s the missing piece

The new GT86 comes powered by the same Subaru-sourced 200 horsepower 2.0-liter direct-injection boxer naturally aspirated engine as the regular GT86 and 2015 Subaru BRZ. But the new 14R-60 GT86 limited edition coupe does feature powertrain enhancements that are getting it ready for a turbo powerplant. The upgrades to the boxer engine include a revised intake and exhaust systems, an oil-cooler, new calibration, lighter flywheel, a new limited-slip differential, short-shift gear shift and performance clutch.

Motoring.com.au says the 14R-60 is a limited-edition model, and just 100 Crystal Pearl White examples will be offered for sale in Japan, and the cost will be more than double the price of the standard 86. This is the most extreme version of the Subaru BRZ/Toyota GT86/Scion FR-S we’ve seen to date. We know that a second-generation BRZ/GT86/FR-S is in the planning. Subaru is expanding their STI models and is going to be releasing a new Forster STI soon. The 2015 Subaru BRZ launched without a turbocharged model, but Toyota and Subaru brought a track-ready BRZ/GT86 coupe to an event here in the U.S. that points to an exciting future. A Subaru BRZ STI turbocharged model may not be far behind.