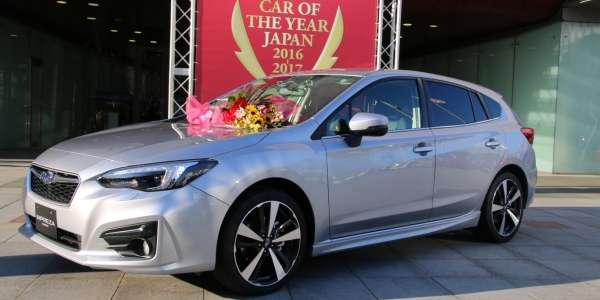 New Subaru Impreza Wins Japan’s “Car of the Year”; It Beats an Impressive List of Cars

The all-new Subaru Impreza has been named 2016–2017 “Car of the Year” in Japan. It beats an impressive list of cars to win.
Advertisement

The new 2017 Subaru Impreza sedan and 5-Door hatch have won Japan’s “Car of the Year”. This is the second time Subaru has been awarded the honor, following the Legacy sedan’s win in 2003. The all-new Impreza compact has received a complete remodel, and it impressed the judges who picked it over an impressive list of cars.

Which cars did it beat?

Impreza wins out over an impressive list of cars to take the coveted 2016–2017 “Car of the Year” in Japan. In alphabetical order, Impreza beats the Audi A4, BMW M2, Fiat 124 Spider, Honda Freed, Jaguar F-PACE, Mercedes-Benz E-Class, Nissan Serena, Toyota Prius and Volvo XC90. The winner was chosen from this year's list of Japan’s “10 Best Cars”.

The new Subaru Impreza received 420 votes to triumph over the Toyota Prius by 49 votes to win the 2017 Car of the Year Japan. In a close battle for third, the Audi A4 polled 149 votes and captured the Import Car of the Year trophy, just 4 votes ahead of the strong finishing Volvo XC90.

Subaru rolls out the new Impreza sedan and 5-Door hatch on the new Subaru Global Platform. It also gets an array of new technologies that should greatly enhance all-around safety as well as a more dynamic driving feel for consumers. It’s the first car ever produced by a Japanese brand to include a pedestrian protection airbag as standard equipment.

The new Impreza is already a success for the Japanese automaker. In its first month in Japan, the new compact outsold its monthly sales target of 2,500 units by more than fourfold, with 11,050 orders. Demand from customers switching from other brands has been especially notable, representing 51 percent of all orders. It was Subaru’s goal to attract first-time Subaru buyers, and it’s working.

The all-new 2017 Subaru Impreza compact joins the 2003 Legacy as the only Subaru vehicles to win the coveted “Car of the Year” in Japan. This year, the new Impreza beats an impressive list of cars to win.

First Videos From Inside The Boring Company's Las Vegas Loop
Cadillac Lyriq, an EV Crossover With a Giant Display, Warms Up With Pre-Production Show
END_OF_DOCUMENT_TOKEN_TO_BE_REPLACED