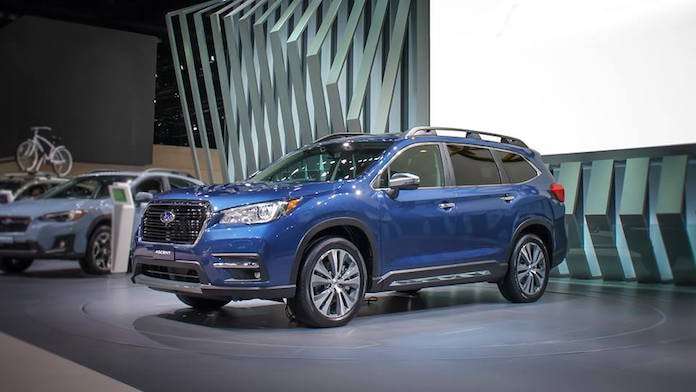 New Subaru Ascent Is Coming To A Car Show Near You; Complete List

The all-new 2019 Subaru Ascent is coming to an auto show near you. Here’s the complete list.
Advertisement

When the new 2019 Subaru Ascent 3-Row family hauler broke cover at the LA Auto Show earlier this month, it got a huge boost in shopper interest. Auto shows have become more than just seeing the latest cool concept cars that will never see production. New data shows auto shows are having a bigger impact on consumers’ shopping than in the past. They are now more about unveiling actual production vehicles consumers are interested in, like the all-new Subaru Ascent.

Shoppers who attended the LA show got a good look at Subaru’s new flagship all-wheel-drive family hauler even though it won’t be in showrooms until next summer. They could open the door, sit inside, and check out Ascent’s standard EyeSight driver assist technology, X-Mode off-road feature, 8.7 inches of ground clearance, and its 72.6 cubic feet of cargo carrying ability.

The all-new 2019 Subaru Ascent family hauler had a 107 percent lift in share of shopper interest, and The Detroit News said the new 3-Row vehicle was one of the 10 best new vehicles on the floor. Now you can see the Ascent and other new vehicles at a car show near you.

Subaru expects the new all-wheel-drive vehicle to be a big hit with current customers looking to move up from an Outback, Forester or Crosstrek and families looking for a 3-Row crossover who have never purchased a Subaru vehicle before. The all-new 2019 Subaru Ascent won’t arrive in showrooms until next summer, but you can see it a car show near you.

What new cars will you be interested in checking out at your local car show next year? If you liked this article and think it may interest your friends, consider sharing or tweeting it to your followers.

Armen Hareyan wrote on January 25, 2018 - 7:50pm Permalink
Looks like a nice looking SUV. I wonder how the new Subaru Ascent will compete with other SUVs in the same class?
Rick wrote on February 21, 2018 - 3:45pm Permalink
Will the redesigned 2019 Subaru Forester be on display at the upcoming Cleveland, Ohio Auto Show?
Denis Flierl wrote on February 22, 2018 - 8:06am Permalink
The next-generation Forester won't revealed until later this year Rick. Thanks for reading!

LG's New EV Battery Plant Is a Welcome News for Tesla
Tesla Giga Berlin's New Hurdle: It's Not Only the Gov't, but Now Tesla Itself
END_OF_DOCUMENT_TOKEN_TO_BE_REPLACED